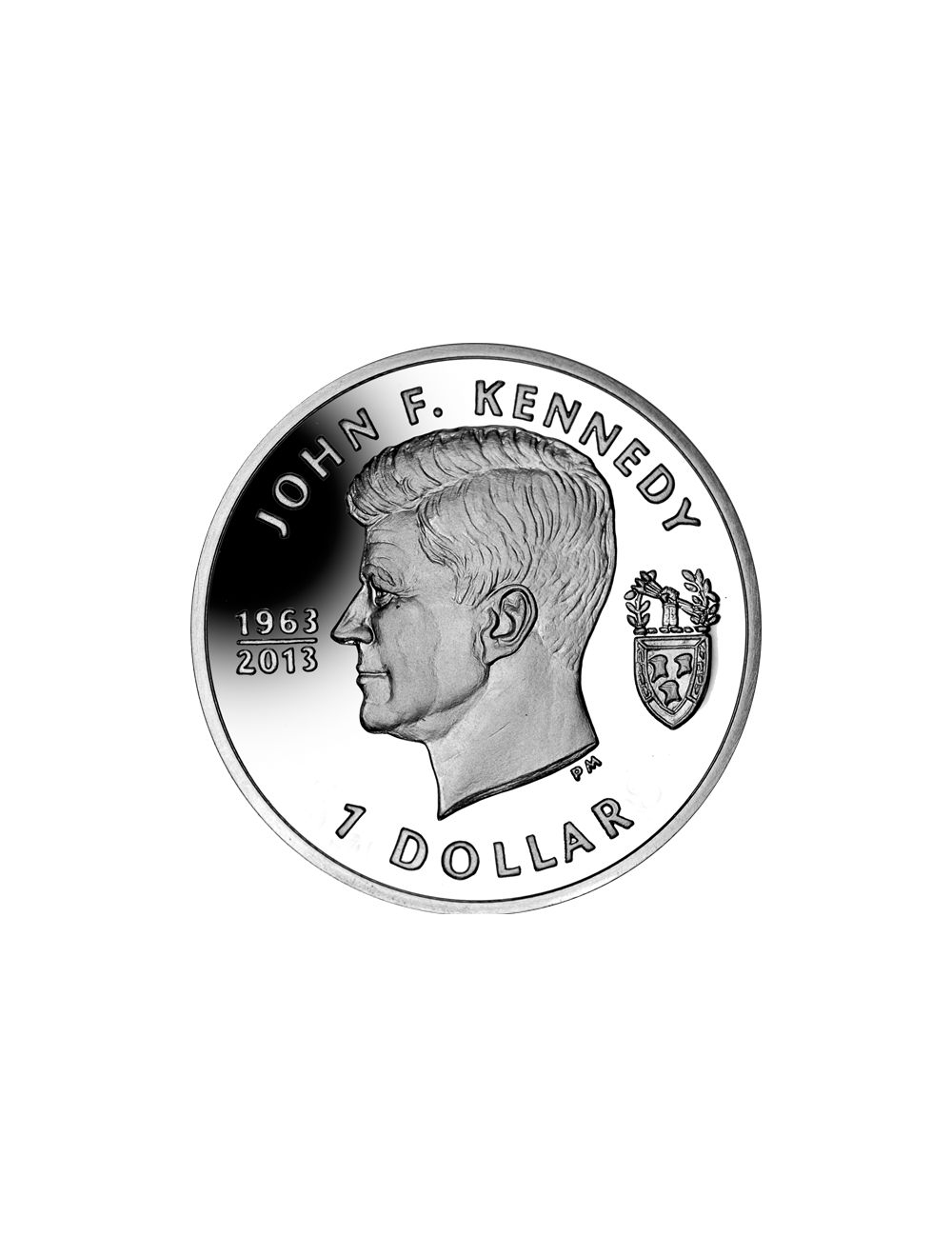 John Fitzgerald ‘Jack’ Kennedy (JFK), 35th President of the United States (20th January 1961 – 22nd November 1963) and America’s first Irish-Catholic President, is commemorated with the release of this special coin from Pobjoy Mint, on behalf of the British Virgin Islands (BVI).

This Uncirculated Cupro Nickel collector’s coin carries a portrait of John F Kennedy, and also a Coat of Arms which was presented to the President on St. Patrick’s Day, 1961. Gifted by T.J. Kiernan, the then Ambassador of the Republic of Ireland on behalf of the Irish Government, this was the first time a foreign sovereign nation had made such a grant to an American President. The design of the Coat of Arms was an amended combination of the symbols historically associated with the Irish names of Kennedy and Fitzgerald, the President’s paternal and maternal lines.

Available in Uncirculated Cupro Nickel, Proof Sterling Silver and 1/2 gm Fine Gold, these commemorative coins have been struck to the highest quality, with the precious metal versions being produced with a stunning ‘proof’ finish.

John F. Kennedy’s remarkable life came to a tragic end when he was assassinated on the 22nd November 1963 by Lee Harvey Oswald in Dallas, Texas.

One of the famous Kennedy clan, JFK’s illustrious career began with military service during World War II. Following this he represented Massachusett’s 11th Congressional district in the U.S House of Representatives, before defeating Richard Nixon in 1960 to become America’s second-youngest President. An eventful time in office, JFK’s name was linked with a number of major historical events including the Bay of Pigs invasion, the Cuban Missile Crisis, the initiation of Project Apollo (culminating with the first man on the moon), the African-American Civil Rights Movement and increased US involvement in the Vietnam War.

June 1963 saw JFK visit his ancestral homeland of Ireland, a homecoming he later described as ‘one of the most moving experiences of my life’. He received the freedom of the cities of Limerick and Galway and four month later welcomed Irish Prime Minister Sean Lemass on his state visit to the United States.

The obverse of the coin features an effigy of Her Majesty Queen Elizabeth II, by Ian Rank-Broadley FRBS. Ian Rank-Broadley is one of the foremost sculptors working today. His effigy of H.M. Queen Elizabeth II has appeared on all UK coinage since 1998 and the Pobjoy Mint has exclusive use of the ‘uncouped’ effigy that appears on the obverse of these coins.