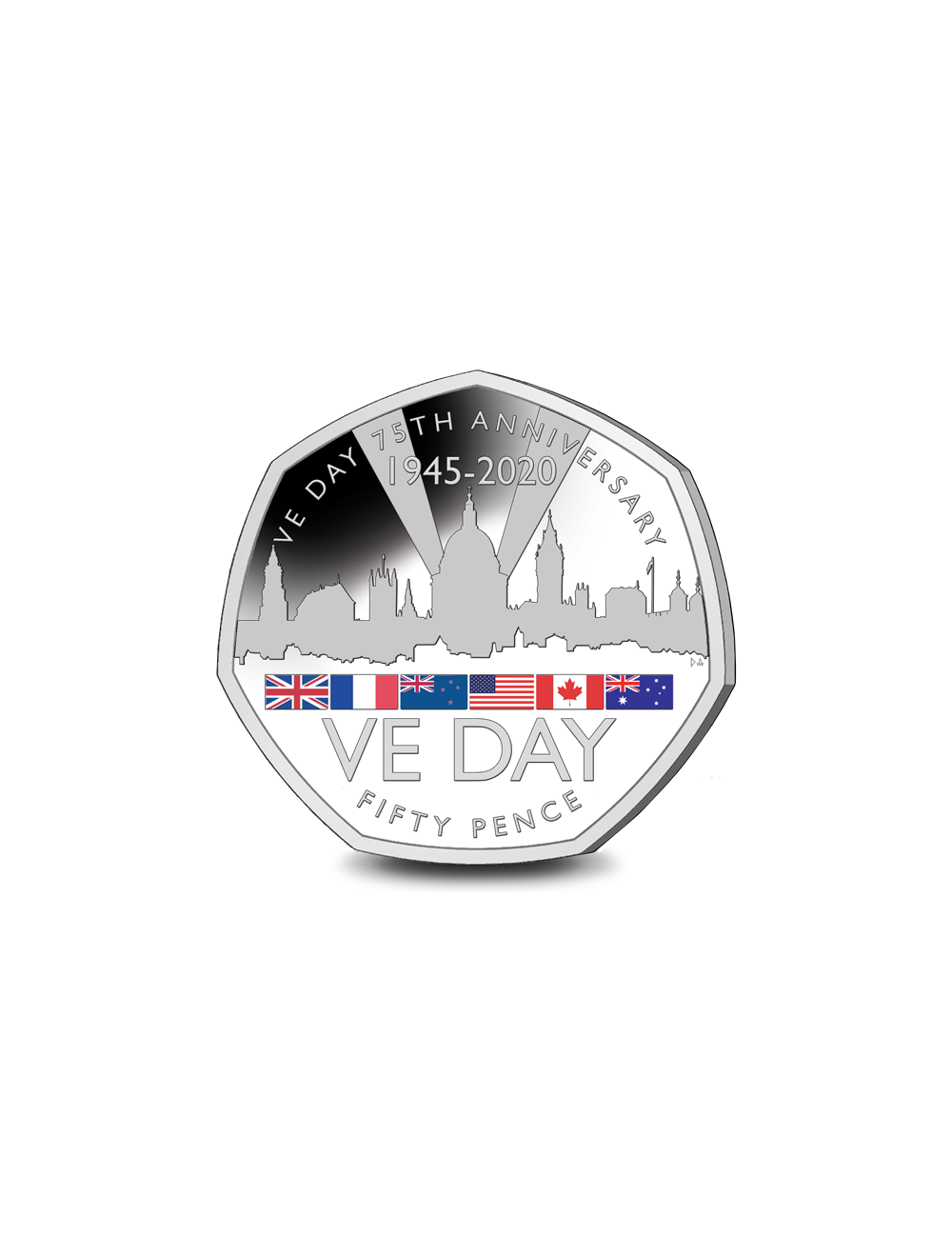 To commemorate the 75th anniversary of VE Day, Pobjoy Mint is pleased to announce the release of this special Coloured Cupro Nickel Diamond Finished 50 pence coin on behalf of the Government of Gibraltar.

The end of the Second World War was a series of submissions which was signified by Victory in Europe day, also known as VE day and this day celebrates the formal acceptance by the Allies of World War II of Germany’s unconditional surrender of its armed forces on 8th May 1945. Upon the defeat of Germany, celebrations erupted throughout the western world. In London, crowds massed in Trafalgar Square and up the Mall to Buckingham Palace, where King George VI and Queen Elizabeth, accompanied by Winston Churchill, appeared from to the Palace cheering crowds.

The design of our stunning new coin features the London skyline including St Paul’s Cathedral and the Palace of Westminster. Searchlights can be seen emanating behind St Paul’s Cathedral. Beneath the Skyline the national flags of the allies can be seen: The United Kingdom, France, New Zealand, United States of America, Canada and Australia.  The wording "VE DAY 75th Anniversary” is displayed at the top of the con with the dates ‘1945-2020’ shown below. The wording ‘VE DAY’ is shown beneath the flags with the value below.

The German forces in Italy surrendered on 2nd May 1945. The following day a high-ranking German delegation, including a senior general, appeared at the headquarters of Field Marshal Sir Bernard Montgomery, located near Lubeck to surrender the German forces in Northern Germany, Denmark and the Netherlands. The final document of unconditional surrender was signed on 7th May 1945 in a schoolhouse in Reims, France, at 0241 hours local time. German General Alfred Johl signed the surrender of all the German forces and General Dwight Eisenhower accepted the surrender on behalf of the allies, ending the war in Europe. The surrender was official at 2301 hours the next day, 8th May 1945 which has since become known as victory in Europe or VE Day.