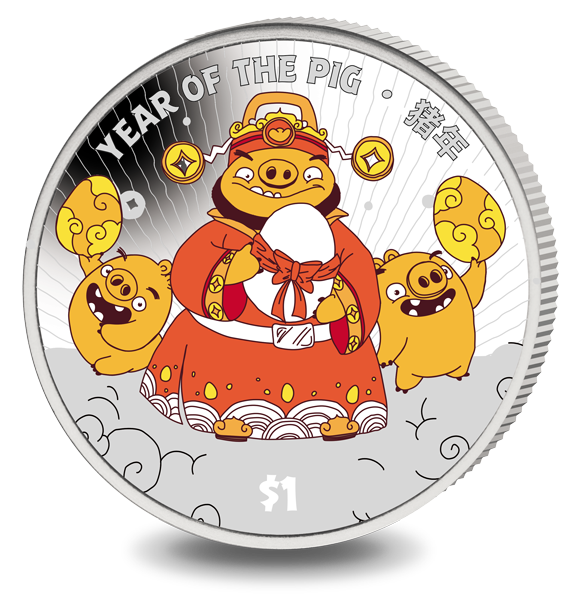 In conjunction with Rovio Entertainment Corporation, Pobjoy Mint has released a new Angry Birds™ themed coloured Cupro Nickel $1 Coin, which celebrates the Chinese Year of the Pig, and with an issue limit as low as 10,000 now available.

Angry Birds™ first appeared on our mobile screens in 2009 as a downloadable game app. It’s since grown into a beloved entertainment brand, reaching global heights and making its mark in the word of gaming, consumer products, cinema and many more industries.

The original story behind ‘Angry Birds™’ is based on an enduring battle between flightless ‘angry’ birds and their arch enemies, the green pigs. The pigs would keep trying to steal the birds’ eggs to take back to their greedy pig king, so the birds would seek to protect the hatchlings at all costs by trying to foil the pigs’ plans.

1. The game developer, Rovio Entertainment Corporation, originally developed more than 50 games for mobile, none of which really took off, before they finally struck gold with Angry Birds™. The game itself cost less than £70,000 to make, and the idea for the game originated from a sketch of wingless birds.

2. Despite the massive levels of instant success Angry Birds™ enjoyed on its release, when the game was originally being developed, it was not treated as a high priority by the company making it. It took four people a whole eight months to make the game, as a result.

3. One of Rovio Entertainment Corporation's original game testers was nicknamed the 'Rovio Killer' because he was so bad at their games.

4. When the original game was in development, a pig was chosen to be the birds’ animal enemy because Swine Flu was constantly making the headlines - and there was an outbreak at the time.

5. According to Rovio Entertainment Corporation, the Angry Birds™ app has now been downloaded over 4 billion times! That’s more downloads of the game than there are people in Africa, Oceania and Europe combined.

6. It took the game just two and a half hours to top Apple’s App Store charts on its release. The beta version for Android was downloaded 1 million times over the course of just three weeks. And on one single day (December 25th, 2012), 8 million downloads of the game occurred over different platforms.

7. The likelihood of there being some celebrity fans amongst those billions of downloads is rather high, and some of the celebrities who have admitted their love for Angry Birds™ over the years includes singers Kylie Minogue and Justin Bieber, ex-UK Prime Minister David Cameron, actor John Hamm and actress Angelina Jolie…

8. If you’re ever passing through Tampere in Finland, you might drive past Angry Birds Land – a park dedicated to Angry Birds™. And whilst you may think this is a one off, you’d be wrong, as there are further Angry Birds™ attractions to be found in other parts of the world, such as Johor Bahru (Malaysia), Doha (Qatar) – and even as close to home as Nottingham!

9. The pigs actually have their own game, which you can download from the app store. ‘Bad Piggies’ allows you to control the pigs and help them steal eggs from the Angry Birds™!

What’s next for Angry Birds™?

‘The Angry Birds™ Movie 2’ will feature many of the original cast from the first film, and general release is anticipated during September this year.

This year also marks the 10-year anniversary of the original game’s release.