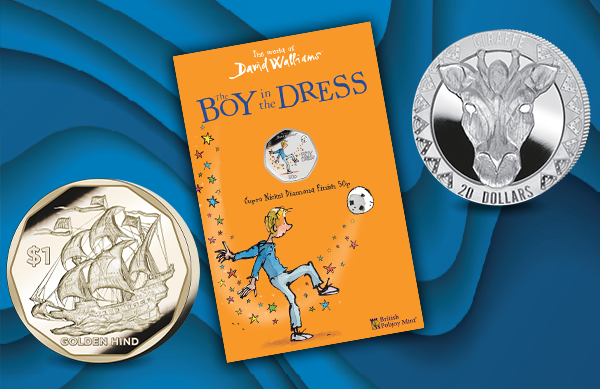 MIn 2021, we launched three brand new series of coins which will continue in 2022. Take a look at the list below:

The World of David Walliams™ Series

In October 2021, we launched a stunning 50 pence coin series with each coin featuring one of seven best-selling novels by internationally acclaimed children’s author David Walliams OBE which is being issued on behalf of the Government of Gibraltar.

The first coin in the series of The World of David Walliams™ features Walliams’ first novel The Boy in the Dress, a story about a boy who isn’t afraid to be different. The design on the coin shows the image of the front cover from the novel and is available in Cupro-Nickel Diamond Finish and Proof Sterling Silver in astonishing colour to match the original illustrations by Quentin Blake.

The second coin in the series features Walliams’ second novel Mr Stink, a wonderfully written tale of a young girl called Chloe who befriends a witty tramp called Mr Stink. The design on the coin shows the image of the front cover from the novel and is available in Cupro-Nickel Diamond Finish and Proof Sterling Silver in astonishing colour to match the original illustrations by Quentin Blake.

The third coin in the series of The World of David Walliams™ features Walliams’ third novel Billionaire Boy, published by HarperCollins Children’s Books – a story about Joe Spud, who is the richest boy in the country and has everything he could ever want, other than a friend. The design on the coin shows the image of the front cover from the novel and is available in cupro-nickel diamond finish and proof sterling silver in astonishing colour to match the original illustrations by award-winning Tony Ross.

In October 2021, we also launched a series of five coins depicting Sierra Leone's "The Wild 5" animals which are produced in magnificent High Relief.

The first coin in the series features the ultimate icon of the savanna – the Giraffe. The world’s tallest mammal, the Giraffe averages at around 4.6-6.1 metres tall, with their legs alone often being taller than most humans. These incredible animals were referred to by Arab prophets as the “Queen of the Beasts” due to their delicate features and graceful poise. Like human fingerprints, no two individual giraffes share the same pattern, making these animals truly unique.

The second coin in the series features the magnificent Hippo. Considered to be one of the most dangerous animals in Africa, it is a highly aggressive animal, especially when in water. Despite being territorial over water and spending most of their day submerged, they cannot breathe underwater and so have to resurface every 3-5 minutes to breathe; they even do this whilst sleeping!

The third coin in the series features the spectacular Antelope. The word antelope is used to describe a wide variety of large, horned mammals in the Family Bovidae. They can be found in grasslands, mountains, deserts and wetlands of Africa, Asia, the Middle East and North America. The largest of all antelopes is the Eland which is approximately 6 feet tall while the smallest is the Royal antelope which is about the same size as a rabbit at only 10 to 12 inches in height.

After the incredible reaction to our 2020 and 2021 Tall Ships series, we decided to launch a brand new 6 coin series featuring ships connected to the British Virgin Islands.

The first coin in this series features the famous English galleon the Golden Hind. The design of the coin features the Golden Hind in all her glory sailing on open water and is available in Virenium®, a metal developed by Pobjoy Mint which is light gold in colour.

The second coin in this series features Columbus's famous ship the Santa Maria. The Santa Maria, originally nicknamed La Gallega, was the largest of three ships used by Christopher Columbus in 1492 during his first voyage across the Atlantic Ocean, with the other two ships being the Niña and the Pinta.

The third coin in the collection features Royal Navy ‘HMS Astrea’, a 32-gun frigate of the British Royal Navy. HMS Astrea (or Astraea) was built at East Cowes, Isle of Wright. After having been rigged and fitted out she was commissioned in Portsmouth on October 1st, 1781. A total of 220 men and officers made up her roster, and she was finally ready to do her duty in the Royal Navy.

The fourth coin in the collection features the mailing ship ‘RMS Rhone’, a British Royal Mail ship owned by the Royal Mail Steam Packet Company. The design on the coin shows the ship sailing in the foreground with the map of the British Virgin Islands in the background.

The fifth coin in the collection features the Royal Navy ship ‘HMS Nymph’, a 14-gun Swan-class sloop of the British Royal Navy. The design on the coin shows an image of the ship before it sank.

Keep an eye out on our new releases page on our website for the next coins in these 3 series!