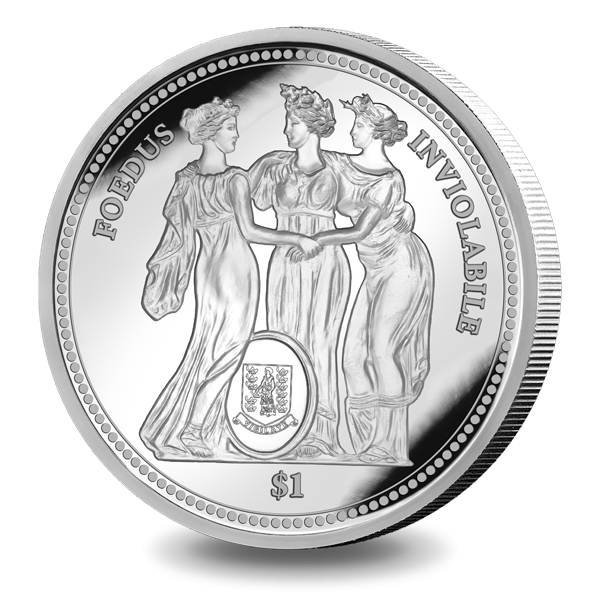 Over the years, we have produced a variety of coins that depict classic designs. In honour of our latest release featuring the famous "Three Graces" design, we have put together a list of some of our recent releases that have featured classic coin designs.

According to Greek Mythology, the Three Graces are the goddesses of festivity and daughters of the mighty Zeus. They each had particular qualities that they were able to bestow upon mortals: Aglaea (the essence of elegance and beauty), Euphrosyne (symbol of laughter and joy) and Thalia, (symbol of youth and playfulness).

William Wyon used the Three Graces to tell the story of the 1801 Act of Union, reflecting a renewed interest in the classics to capture the moment when the Kingdom of Great Britain and the Kingdom of Ireland combined to form The United Kingdom. The trio represents Ireland (with her attribute, the harp), Britain (with the Union flag on her shield), and Scotland (besides a thistle). They are more modest than the figures in Antonio Canova's marble group of the Three Graces but are manifestly inspired by them, hence the name.

Take a look at our 2022 coin that features the Three Graces to commemorate the 20th Anniversary of the British Overseas Territories Act on behalf of the British Virgin Islands.

Britannia is the national personification of Britain as a helmeted female warrior holding a trident and shield. An image first used in classical antiquity, the Latin Britannia was the name variously applied to the British Isles, Great Britain, and the Roman province of Britain during the Roman Empire. Typically depicted reclining or seated with spear and shield since appearing thus on Roman coins of the 2nd century AD, the classical national allegory was revived in the early modern period. On coins of the pound sterling issued by Charles II of England, Scotland, and Ireland, Britannia appears with her shield bearing the Union Flag. To symbolise the Royal Navy's victories, Britannia's spear became the characteristic trident in 1797, and a helmet was added to the coinage in 1825. Britannia is known as a symbol of British unity, liberty and strength.

The patriotic British song ‘Rule, Britannia!’ originated from a poem written by James Thomson of the same name and was set to music in 1740 by Thomas Arne.  The song has always been strongly associated with the Royal Navy but was also used by the British Army.  This British tune was first performed at Cliveden, the country home of Frederick Prince of Wales on 1st August 1740.

The Elgin Marbles, also known as the Parthenon Marbles, are a collection of Classical Greek marble sculptures made under the supervision of the architect and sculptor Phidias and his assistants. They are original parts of the Parthenon and other sacred and ceremonial structures built on the Acropolis of Athens in the 5th century BCE.  The collection is on display in the British Museum, in the purpose-built Duveen Gallery.

From 1801 to 1812, agents of Thomas Bruce, 7th Earl of Elgin removed about half of the surviving sculptures of the Parthenon, as well as sculptures from the Propylaea and Erechtheum,[4] and had them transported by sea to Britain. Elgin argued as his authority for this that he had obtained an official decree (a firman) from the Sublime Porte, the central government of the Ottoman Empire which, as ruler of Greece, was at that time the legal owner of the sculptures. This firman has not been found in the Ottoman archives despite its wealth of documents from the same period and its veracity is disputed. The Acropolis Museum displays a portion of the complete frieze, aligned in orientation and within sight of the Parthenon, with the position of the missing elements clearly marked and space left should they be returned to Athens.

Our remarkable coin from the British Virgin Islands (BVI) features one of the highlights from the Elgin Marbles in an antiqued Bronze $1 Coin. It displays two charging horsemen in exceptionally high relief to capture the drama of the original frieze that was carved more than 2,400 years ago. Check it out here.

Lion and the Unicorn:

The Lion and the Unicorn signify the United Kingdom and appear as its heraldic supporters on its coat of arms. The Lion represents England and the Unicorn represents Scotland. The combination of the two animals dates back to the accession of James I of England in 1603, who was also James I of Scotland. Over the last 400 years, these animals have become strongly associated with Royalty and therefore our Queen, Elizabeth II. By extension, they have also been used in the arms of Hanover between 1837–1866 and the arms of Canada since 1921.

The traditional legend of enmity between the two heraldic animals is recorded in a nursery rhyme which has a Roud Folk Song Index number of 20170. The legend of the two animals may have been intensified by the Acts of Union 1707 and it was one year later that William King (1663–1712) recorded a verse very similar to the first stanza of the modern rhyme. This rhyme was played upon by Lewis Carroll, who incorporated the lion and the unicorn as characters in his 1871 novel Through the Looking-Glass.

Take a look at our 2018 coin that depicts The Lion and The Unicorn in celebration of HM Queen Elizabeth II Sapphire Coronation on behalf of the British Indian Ocean Territory.

Una and the Lion:

Una and the Lion was a British £5 gold coin depicting Queen Victoria. It is recognized as one of the most beautiful British coins ever struck. It was designed by William Wyon in 1839, to commemorate the beginning of Queen Victoria's reign (in 1837). The coins were first produced in 1839 and were probably intended for collector sets rather than for circulation. The production ran to a few hundred coins including a number of variations such as different metals, different hairbands on the depiction of the queen, different edge types, and a variation in the reverse inscription. The reverse of the coin is a depiction of Queen Victoria walking to the left of a lion. The Latin phrase DIRIGE DEUS GRESSUS MEOS – "May God direct my steps".

The beautiful and famous Una & the Lion design of 1839 was created by the celebrated 19th-century numismatic sculptor William Wyon.  The theme for the coin was drawn from Edmund Spenser’s poem Faerie Queene which tells the tale of Una & the Lion which follows Princess Una after St. George had slain the dragon and rescued her.

Take a look at our 2019 coin that features Una and the Lion to commemorate the Bicentenary of Queen Victoria, on behalf of the British Virgin Islands.

The story of Pegasus begins when Perseus is sent to kill one of the three Gorgons – Medusa who had writhing snakes instead of hair.  It was said that anyone unfortunate enough to gaze on her face would turn to stone.  The God Hermes and the Goddess Athena came to aid Perseus with special gifts, including a shield which Perseus used as a mirror so he did not look directly at Medusa.  When Perseus beheaded Medusa it is said that Pegasus was born from the blood of the Gorgon.

After Pegasus had helped Perseus rescue Andromeda, he was carried to Mount Helicon where he was entrusted to the care of the Muses. Many wanted to capture Pegasus but no one could work out how to tame such a magnificent creature.  After being advised to sleep in the temple of Athena, Bellerophon saw the goddess before him holding a golden bridle.  When he awoke he was alone but the bridle remained.  He ran from the temple and found Pegasus drinking at a spring.  Bellerophon put the charmed bridle on the winged horse’s head with little difficulty and, with the bridle in place, Pegasus became gentle and tame and Bellerophon became his master. Throughout his life, Pegasus remained a mysterious creature that symbolised divine inspiration or the journey to heaven. As a reward for his service and loyalty, Zeus honoured him with special immortality, turning him into a constellation on the last day of his life.

Pegasus first featured on a Reverse Frosted Bullion coin back in 2017 and has since reached its 5th edition in 2022. We also produced a special Virenium® $1 coin on behalf of the British Virgin Islands in 2018 featuring Pegasus rearing up with his wings spread.