Commemorate the 250th Anniversary of the Launch of HMS Resolution 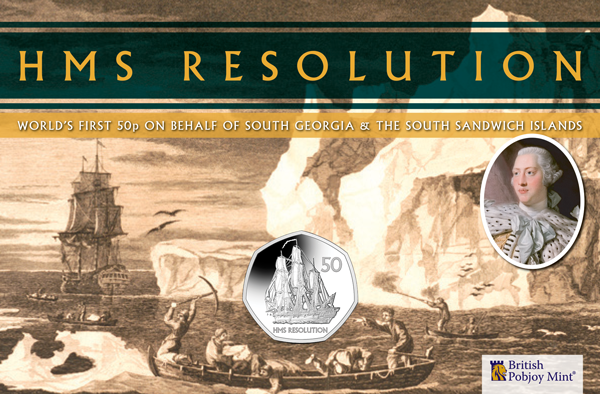 We are delighted to announce the release of a new 50p coin on behalf of South Georgia and the South Sandwich Islands Government. This coin features the HMS Resolution and is in honour of the 250th Anniversary of the Ship's Launch.

HMS Resolution was a sloop (more commonly known as a warship) of the Royal Navy, a converted merchant collier that was purchased by the NAvy and then adapted. This vessel became known for being the ship in which Captain James Cook made his second and third voyages of exploration in the Pacific. He believed she was impressive enough that he called her "the ship of my choice" and "the fittest for service of any I have seen".

On the 21st Jun 1772, Resolution departed Sheerness, carrying 118 people, including 20 volunteers who had sailed alongside Cook on his first voyage. She joined HMS Adventure at Plymouth and thus departed English Waters on 13th July 1772.

As of the 17th January 1773, HMS Resolution was the first ship to cross the Antarctic Circle and crossed twice more on her voyage. The third crossing, on 3rd February 1774, was the most southerly penetration. As a result, Resolution proved Alexander Dalrymple's Terra Australis Incognita to be a myth.

HMS Resolution returned to Britain in 1775 and was then decommissioned.

HMS Resolution was recommissioned in February of 1776 for Captain James Cook's third voyage. This journey began on the 12th July 1776, departing from England, during which Resolution crossed the Arctic Circle on 17th August 1778, and then again on the 19th July 1779, under the command of Charles Clerke after the death of Captain James Cook. She arrived back in Britain on the 4th of October 1780.

The design of our stunning new 50p coin features Cook's ship, the HMS Resolution, which was a sloop of the Royal Navy that called it "the Ship of my Choice and the fittest for service of any I have seen". The obverse of the coin features the exclusive Pobjoy Mint effigy of Her Majesty Queen Elizabeth II. Our brand new coin is presented in a special anniversary pack.