Coins Commemorating 40 Years of the Liberation of the Falkland Islands 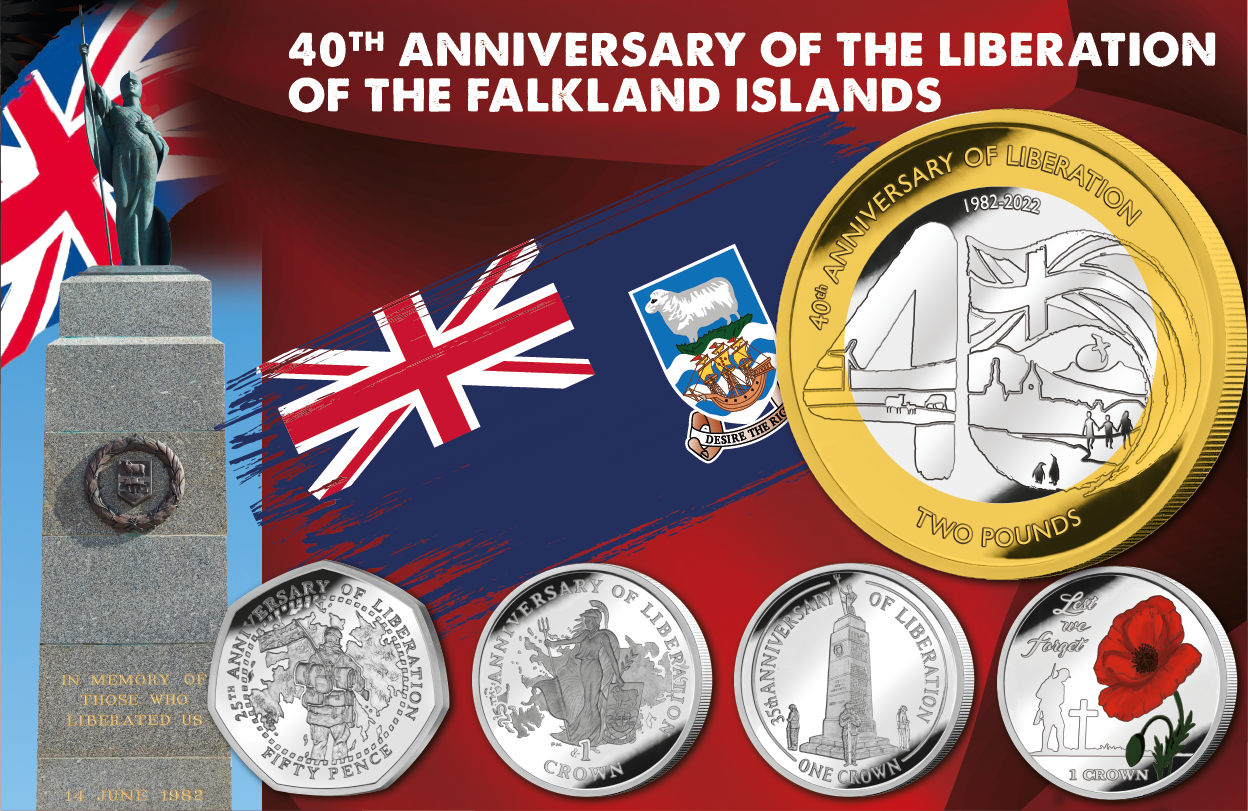 In honour of the 40th Anniversary of the Liberation of the Falkland Islands, we have put together a list of our releases that commemorate this historic event.

Liberation Day takes place on the 14th of June and commemorates the end of the occupation of the Falkland Islands by Argentina in 1982. Islanders gather at Christ Church Cathedral to mark the occasion with a thanksgiving service, followed by wreath-laying at the Liberation Monument and a military parade. The day is a public holiday in the Falkland Islands.

The British Government then led by Margaret Thatcher responded to this attack by sending a large task force to recapture the Islands, including a member of the British Royal Family, Prince Andrew, who personally fought in the Falklands. The Campaign launched by Margaret Thatcher, which probably initiated her nickname of the ‘Iron Lady’, was one of the most memorable events in post-war British History, in which British Forces operated 8,000 miles from home and in terrible conditions.  Nearly 1,000 people lost their lives during the 74-day conflict but the War was brought to an end on 14th June, with the surrender of Argentina and the announcement of Britain as the victor.

Yomper 50p Coin - The 25th Anniversary of the Liberation of the Falkland Islands was celebrated on 14th June 2007 and to mark this significant historical event, we released the first-ever circulating coin, produced on behalf of the Government of the Falkland Islands. This collector's coin was a 50 pence piece depicting a magnified map of the Falkland Islands in the background with a back view of a ‘Yomper’ in the centre.  The marching figure is seen carrying a rucksack on his back with a Union Flag.  Approved by Buckingham Palace the obverse of the coin bears a fine couped effigy of Her Majesty Queen Elizabeth II by Ian Rank-Broadley FRBS FSNAD. 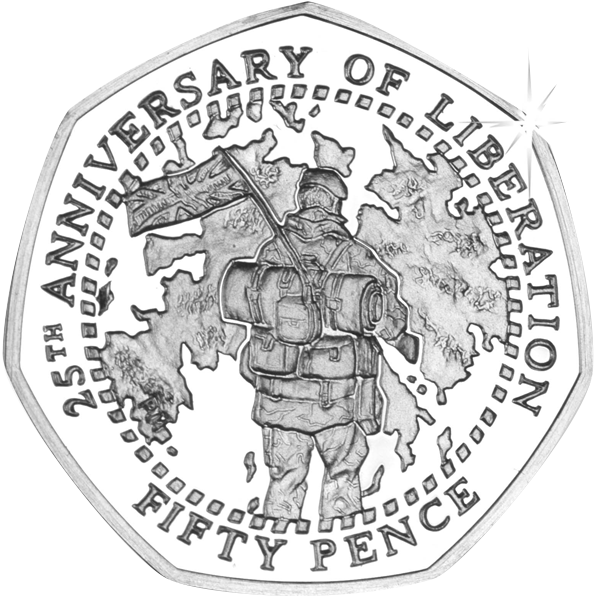 Britannia Crown Coin - To commemorate the deliverance by British Forces of the Falklands Islands from the Argentine occupation on 14th June 1982, Pobjoy Mint released a stunning coin on behalf of the Falkland Islands Government, depicting Britannia – the figure of national personification of the United Kingdom. The name Britannia originates from around 300BC in a reference from Greek Explorer, Pytheas and was the preferred Roman term for Great Britain following the Island’s invasion by Julius Caesar in 55BC.  Britannia was personified by the Romans as a Goddess and in early portraits, she appears as a beautiful young woman, wrapped in a white garment and wearing the helmet of a Centurion.  She often appeared seated on a rock and holding a spear with a spiked shield propped beside her. 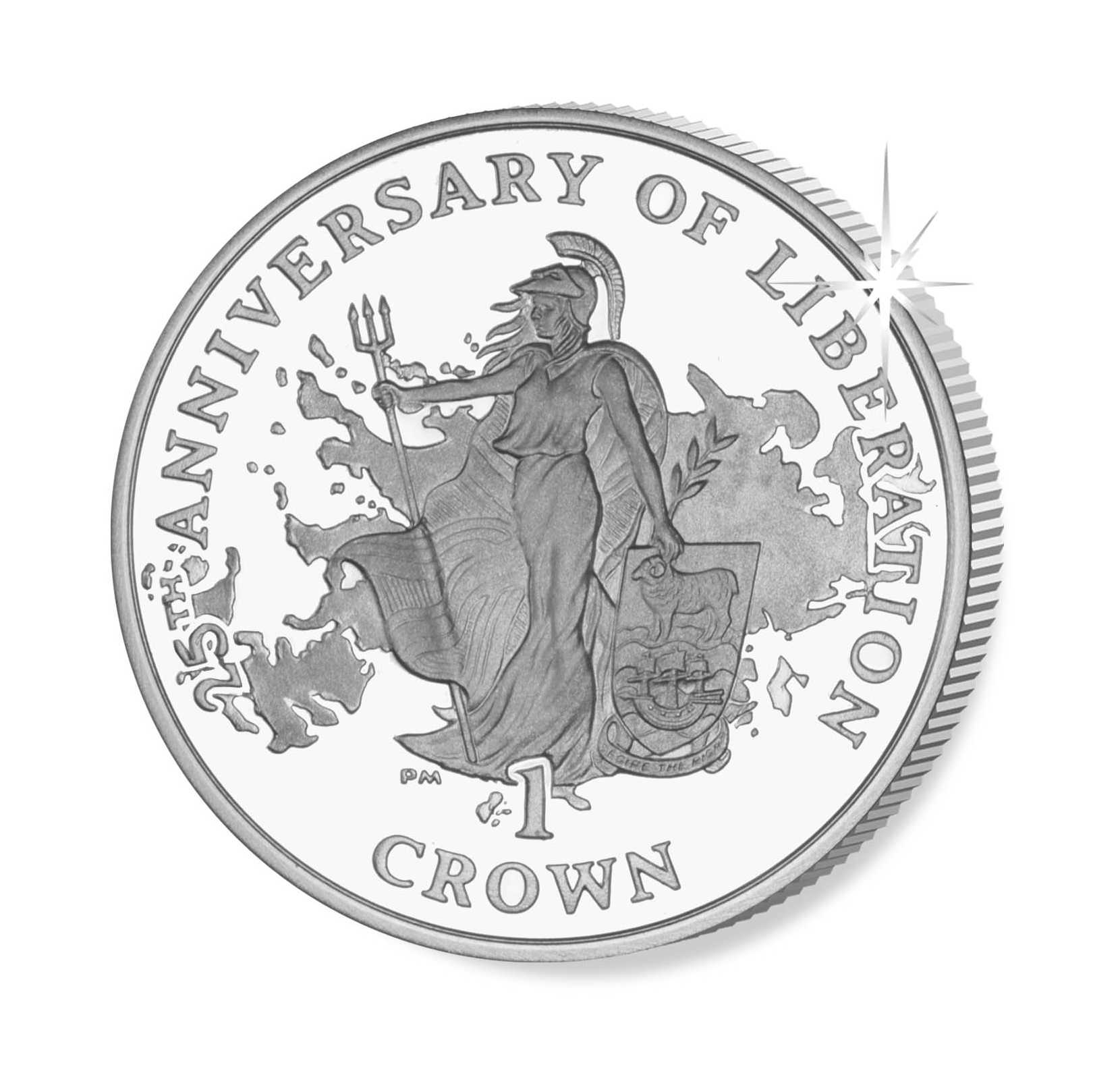 Lest We Forget Crown Coin - To commemorate the 35th Anniversary of the Falklands war, Pobjoy Mint has produced a ‘Lest We Forget’ Poppy coin in honour of the soldiers that gave their lives for the sovereignty of Britain. The reverse of the coin featured the silhouette of a soldier poised in thought whilst standing over the grave of a fallen comrade. We also included a poppy in the design, the symbol of remembrance. When producing the poppy we have added great detail in order to bring it to life, with multiple shades of red used on the coloured versions. This stunning design was produced in Proof Sterling Silver, Coloured Proof Sterling Silver, Unc. Cupro Nickel, and Coloured Unc. Cupro Nickel. 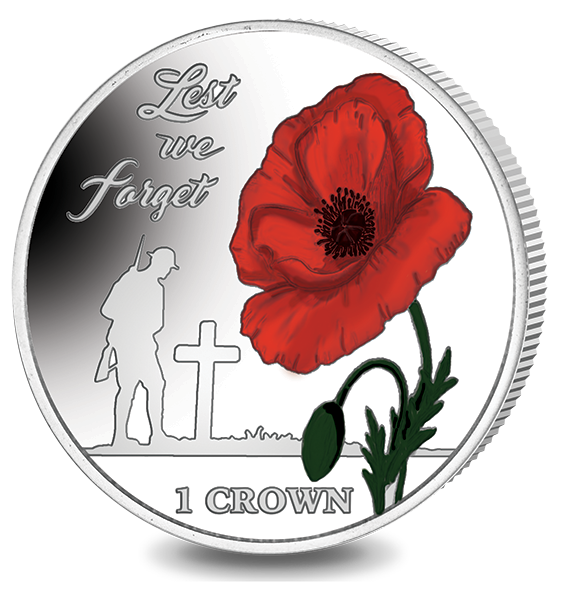 Liberation Monument Crown Coin - To commemorate the 35th Anniversary of the Falklands Liberation, Pobjoy Mint has produced a coin in honour of the soldiers that gave their lives for the sovereignty of their country. The reverse of the coin features three soldiers facing away from the monument with their heads bowed and both hands placed on top of a sword bayonet in a formation also known as the Prince’s Vigil. In the centre, you can see the Falklands Liberation monument crowned with the bronze statue of Britannia. 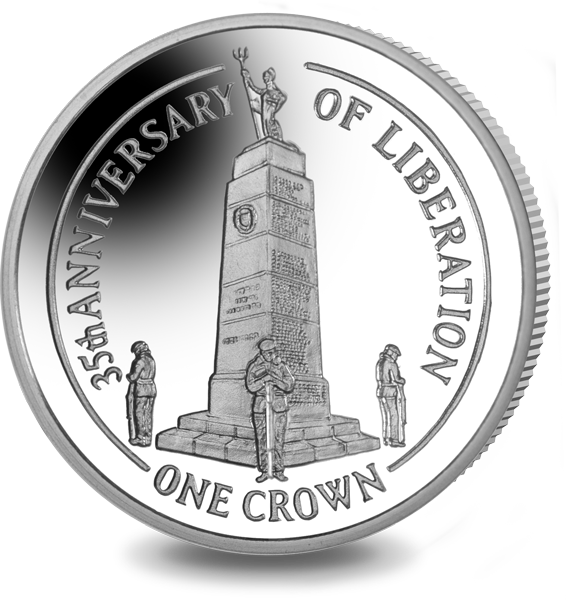 Falklands 40 £2 Coin - 2022 marks the 40th anniversary of the liberation of the Falkland Islands and to mark this significant historical event, we have released a brand new £2 coin, produced on behalf of the Falkland Islands Government. This collector's coin is a £2 piece and features the official 40th Anniversary of Liberation emblem (Also known as Falklands 40th) which comprises the number 40 with the Union Jack and incorporates various aspects of life on the Falkland Islands. 2022 has been named the “Looking Forward at Forty” year, a special way of making it a time to reflect on the achievements that have been made with their hard-won freedom, and to look forward to the next 40 years of life in the Falkland Islands. Also available in Proof Fine Silver with Goldclad®. 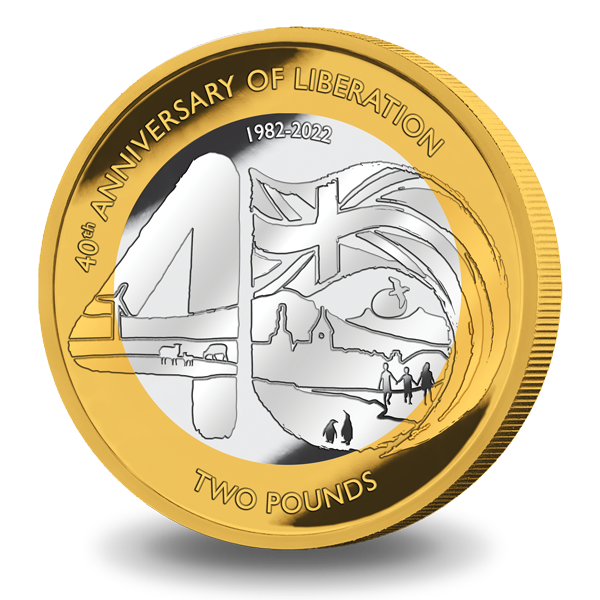 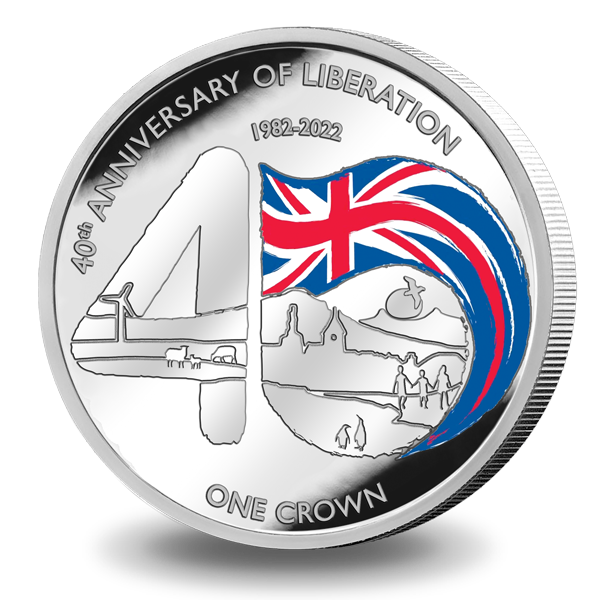