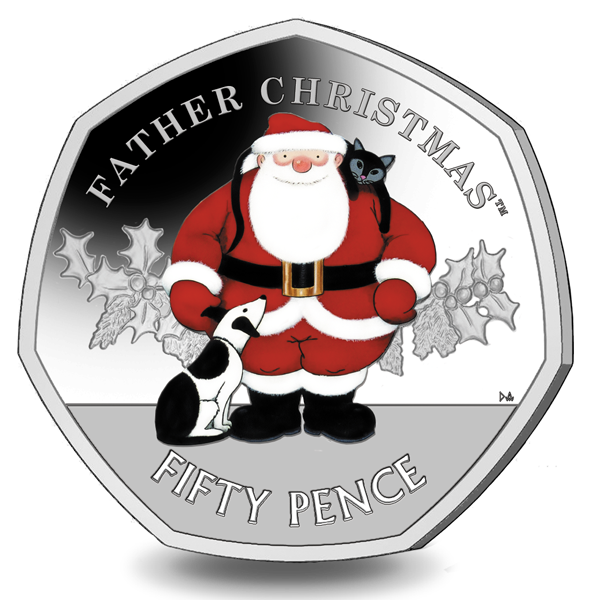 He still looks like the Santa we all know and love, with his large white beard and red suit. However, Raymond Briggs' Father Christmas is rather grumpy and works from a normal house whilst coping with everyday domestic chores; he doesn't even have a Mrs Claus or Elves to assist him. He also lives with his cat and his dog, and two reindeer.

The first book won the annual Kate Greenway medal from the Library Association in 1973 which recognised the year's best children's book illustration by a British subject. In addition, for the 50th Anniversary of the Medal in 2005, a panel named it one of the Top Ten winning works.

The design for Pobjoy Mint's 2019 Father Christmas 50 Pence shows an illustration from Raymond Briggs' book featuring Father Christmas with his dog at his feet and his cat sitting on his shoulder. The inscription on the coin reads "Father Christmas" and the value "Fifty Pence" is displayed at the base.

Approved by the Licensor and Buckingham Palace (which is very fitting as in the book, the last Christmas delivery is to the Palace), the obverse of the coin carries the Pobjoy Mint Exclusive effigy of Her Majesty Queen Elizabeth II.