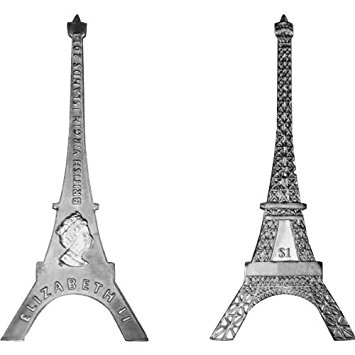 Now that we are at the end of February, let's reflect on the month of love! Here at Pobjoy Mint, we have a special feeling for February, and this is why we are excited to share with you the top ‘love’ themed coins from our collection, along with some the touching stories behind them. Hopefully you won’t need to reach for the tissues!

The couple exchanged their vows on November 20th, 1947 at Westminster Abbey, and they are the longest standing marriage in history of any British sovereign!

In 2017, Her Majesty Queen Elizabeth and His Royal Highness Prince Philip celebrated a major milestone - their platinum wedding anniversary - which made a significant mark on their time-honoured relationship.

According to popular belief, however, the love between the British Queen and her husband wasn’t always as strong, as you’d think.

The couple first met in 1934 when the Queen was just eight years old, at the wedding of Princess Marina of Greece and Denmark and Prince George, Duke of Kent.

And as in a proper modern fairy-tale, the pre-teen princess met a dashing young prince, both eventually falling for each other in July 1939.

At that time, Elizabeth (13) visited the Royal Naval College in Dartmouth, Devon, where she was re-connected with Philip (18), who had enrolled at the school two years earlier - and happened to be her tour guide. According to witnesses, it was love at first sight, especially for young Elizabeth, who decided to stay in touch with her older, charming friend by exchanging letters with him. She even invited him for the royal family’s Christmas celebrations at Windsor Castle in 1943.

But as with any fairy-tale, this love wasn’t trouble-free. The Queen’s father, King George VI, later challenged the couple’s feelings for each other. Because of some natural fatherly concern for his cherished daughter, George had to overcome his doubts for Philip first before they could take the relationship further.

His doubts were mainly due to the Prince’s wild personality, as well as the young Navy servant’s general lack of financial independence.

The royal couple finally married in 1947 and are living happily ever since!  And eventually, the King and soon-to-be-Prince got along really well - to the point where, when King George died in 1952, Prince Philip’s immediate reaction was to exclaim: “the world had collapsed on him”.

Diana Frances Spencer - also known as Princess of Wales - was a member of the British Royal Family, and the first wife of Charles, Prince of Wales.

Lady Diana first met Charles in 1977, when he visited her family home for a pheasant shoot. He was the companion of Diana’s elder sister, Sarah Spencer, and had expressed no romantic interest in Diana at all – probably due to the significant age difference of over 13 years between them!

Although Sarah and Charles dated briefly, it’s believed that Charles ended their relationship because Sarah was ‘too open’ about their relationship in the media. Eventually, the future King of England became attracted to Diana, and he went on to propose to her in February 1981.

Reportedly, they only spent time together on just 12 occasions before their engagement!

The couple married on July 29th, 1981 at St. Paul’s Cathedral, and Lady Diana officially received the title of ‘Diana, Princess of Wales’. Later that year, Princess Diana announced that she was pregnant, and gave her birth to Prince William on June 21st, 1982.

The ‘Queen of Hearts’, as she was also known, stole the hearts of the nation thanks to her grace and willingness to support many charitable causes, especially ones which others were reluctant to be associated with (for example, she opened Britain’s first AIDS ward at Middlesex hospital in 1987).

Unfortunately, the marriage ended in separation, due to the Prince’s alleged affair with Camilla Parker-Bowles – the current Duchess of Cornwall.

As we all know, 1997 saw Prince Diana suffer fatal injuries from a serious car accident in Paris. Diana remains an unforgettable icon of style, empathy and femininity.

Paris is undoubtedly the ‘city of love’. But what is it about Paris that makes it so romantic? Is it the thought of stealing a kiss under an illuminated Eiffel Tower at night? Enjoying a picnic in the springtime beauty of the Luxembourg Gardens? Sharing a delicious éclair with your ‘petit chou’ at some charming little patisserie…?

For decades, the French capital has been a destination for couples wanting a romantic trip or honeymoon, and it’s the ultimate setting for any writer’s romantic story or novel.

The city also prides itself on it’s sheer number of “love attractions” - such as the Eiffel Tower (known as a “Symbol of Love”) and the Pont des Arts - a historic pedestrian bridge. This bridge is known for the hundreds of attached padlocks attached to its metal structure; all left by French lovers and tourists.

If you always dreamed about visiting Paris and experiencing true romance, you can always catch up on some literature before catching the first flight! Some bestselling books such as “Anna and the French Kiss” by Stephanie Perkins and “The Chocolate Thief” by Laura Florand set their stories in Paris, which make them a fantastic read for someone wishing to get into the romantic spirit without leaving their bed.