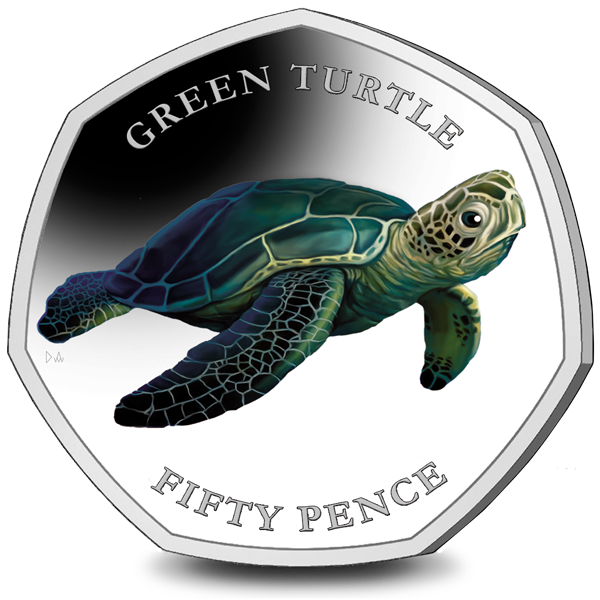 "SLOW BUT STEADY WINS THE RACE"

Here at Pobjoy Mint, we are delighted to announce the release of the first coin in a stunning new 50p series of five coins that feature the Turtles of the British Indian Ocean Territory. Sea Turtles have existed for over 120 million years, with seven different species gracing our ocean waters. They have a soft, boney, shell, with flipper-like limbs and spend an incredible 99% of their lives in the ocean.

The first coin in our brand new five-coin 50p series features the Green Turtle, the largest species in the family of hard-shelled turtles, and the second-largest among all sea turtles. Our coin features this stunning animal swimming in the ocean, with the Green Turtle being portrayed in colour to show off its true colours. This new series will be available in Coloured Cupro Nickel Diamond Finish and has a specially designed album available that will house all five coins in this new series. The obverse of the coin features the Pobjoy Mint exclusive effigy of Her Majesty Queen Elizabeth II.

About the Green Turtle:

During their lifetimes, it is not uncommon for Green Turtles to travel incredibly long distances, just like most sea turtles do. Some travel across entire oceans from where they would feed just to return to their nesting beaches. To be able to navigate themselves across such long distances throughout their migrations, Green Turtle's rely on the earth's magnetic field, using it almost as if it were an invisible map.

Like most other sea turtles, Female Green Turtles will return to the same beach where they hatched in order to make their nests; they will lay approximately 100 eggs per clutch and will nest several times over the course of a few weeks. On the protected beaches of the British Indian Ocean Territory, it is estimated that 1,000 female Green Turtles nest annually. Once the eggs have hatched, the baby sea turtles make their way to the water, often having to survive this small journey first from predators, and then swim to offshore areas.

Sadly, the activities of humans have tipped the scales against the survival of these beautiful creatures. As like many other species of Turtle, the Green Turtle is considered an endangered species due to poaching and over-exploitation; they also face the destruction of their habitat, primarily due to pollution, and accidental capture in recreational or commercial fishing gear. Fortunately, the awareness of the risk currently faced by these stunning marine animals is on the rise, and therefore we should one day soon, see their numbers start to rise again.