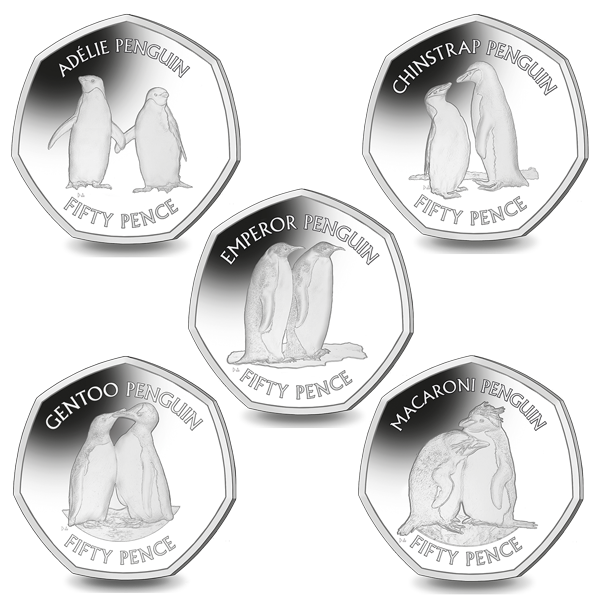 2019 has once again proven that penguins remain as popular as ever. This year, here at Pobjoy Mint, we had the privilege to mint native penguins from the British Antartic Territory onto a five-piece 50p series for the first time. Customers loved them, with many asking for more penguin coins to be made, and some even asking for an uncoloured version of the series to be minted.

And so, after the exceptional response to the coloured series, Pobjoy Mint is delighted to release this stunning series as Uncoloured Circulating Cupro Nickel. These new coins are available to purchase only as a five-piece set and are LIMITED EDITION. Included in this set will be the Adelie Penguin, the Chinstrap Penguin, the Emperor Penguin, the Gentoo Penguin, and the Macaroni Penguin. Each coin will depict a male and female penguin of that species, and the obverse will show the exclusive Pobjoy Mint Effigy of Her Majesty Queen Elizabeth !!.

About the Penguins of the British Antarctic Territory:

Penguins are the most common birds that can be found living in the British Antarctic. They live in colonies, with some being larger than cities, and they can survive in the harshest of conditions. All penguins have a similar body form and structure; however, they can vary substantially in size and can typically be differentiated by their distinctive colours and features to their head and neck.

Instead of walking, penguins are known to waddle, and whilst this may look very comical, it actually has a rather logical explanation. Studies have found that walking with a swaying motion can lead to saving around 80% of their energy, which is vital when trying to survive in the coldest place on Earth.

To be able to withstand the endless hours standing on the ice, the blood flow to the penguin's feet is tightly controlled, reducing the flow in the extremely cold environment. Their short outer feathers overlap each other, much like tiles on a roof, which forms a thick, waterproof layer. Underneath are fluffier feathers which provide the penguins with some warmth. As a general rule, the larger the penguin is, the easier it is for them to conserve heat. Many often fail to believe that some breeds are so good at keeping warm, that during summer they often encounter the problem of overheating.