Penultimate Coin in the 50p Turtles Series featuring the Loggerhead - Out Now! 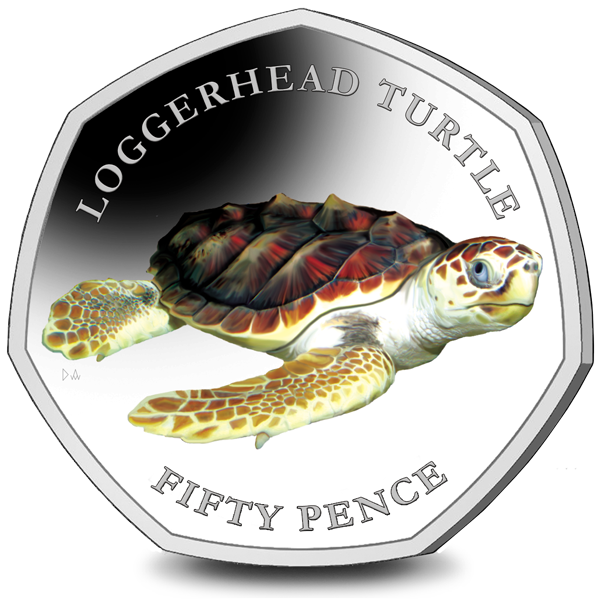 The Penultimate Coin in the Stunning Turtle Series is Here!

We are delighted to share that the FOURTH coin in our stunning 50p Turtle Series on Behalf of the British Indian Ocean Territory has arrived. This stunning series has proven to be a well-loved addition to our growing 50p collection.

About the Loggerhead Turtle:

The loggerhead turtle is a large-bodied sea turtle named for its broad, strong head. These turtles are generalists predators and use their muscular heads and powerful jaws to crush the shells of queen conch, Caribbean spiny lobsters and other hard-shelled invertebrates.

It is one of the world's largest hard-shelled turtles with adults measuring between 75cm and 100 cm, and weighing up to 160kg. With an estimated population of 40,000 to 50,000 nesting adult females, the Loggerhead is sadly considered a vulnerable species.

The Loggerhead Turtle in Real Life:

I recently visited Cape Verde and had the opportunity to go on an excursion to see the sea turtles run by the turtle foundation in Boa Vista. The turtles typically come onto the beach at night to nest and give birth as there is less risk from predators along with it being cooler. Interestingly the temperature of the sand can dictate the sex of the baby turtles with the hotter the sand the higher ratio of females being born. The tour operator picked us up from the hotel at 8 o’clock in the evening and we travelled 45 minutes to a protected beach. We were told that we could not take any cameras or lights with us as this could affect the turtle’s sense of direction, because if a light is shone in front of them pointing away from the sea they would think this is the sunrise and head towards the light thinking that would be the path back into the sea.

When we arrived we had a short walk to a camp which was located near to the secluded beach and we were given some interesting facts about all the different species of turtles. One of the guides from the foundation led us out on the beach, all walking in a single file carefully following their footsteps. We came to a halt and were told to gather around behind a turtle spotted by another member of the foundation; it was a loggerhead. She was laying her eggs into a hole she had made in the sand. As it was dark, there were special red lights positioned to allow us to see the turtle. After 15 minutes or so the turtle covered up its eggs scattering the sand afterwards to mislead any predators from knowing where the eggs were buried. Once finished the Loggerhead made the journey across the sand and back out to the sea which was an amazing experience and one that I won’t forget.