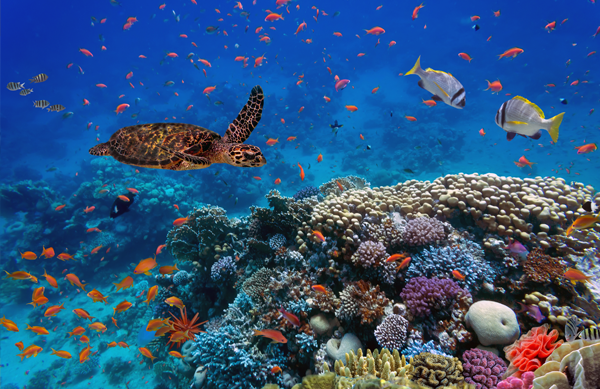 Climate change, overfishing, and plastic pollution are all causing tremendous damage to our beautiful oceans which are full of extremely rare and fascinating life. Human-related activities are to blame for what is happening to our oceans and it is up to us to save them by taking action. Earlier this month, we celebrated World Oceans Day, and therefore, we have decided to dedicate a full blog post to talk about preserving our oceans.

What is happening to our oceans

Climate change is something we have been hearing more and more about in recent years but how is this affecting our oceans? The warming of the earth is caused largely by agriculture and the burning of fossil fuels. These activities are releasing large amounts of greenhouse gases into the atmosphere. A lot of the energy which is created as a result of these human-related activities is then absorbed into the oceans. This means that our oceans are also warming up which is very harmful to many ecosystems.

Overfishing is another serious threat to our oceans. It has been recently found that more than 80% of the world's fish species are overfished. Some people may not understand why fishing is causing so much harm if it has been something that has been done from the beginning of time. However, many fishing practices are not sustainable nor ethical. For example, trawling for prawns can destroy the whole seabed and results in higher levels of bycatch which are thrown into the ocean, dead.

Our oceans are clogged with plastic and this is something we are all contributing to. We buy and throw away what we want without giving it a second thought. Did you know that 100% of sea turtles, who are already endangered, have been found to have plastic inside them? This is because of all the plastic we are buying, using, and throwing away. It is estimated that around 12 million tons of plastic enter the ocean each year. Some of this plastic is then eaten by marine animals while the bigger plastics are broken down over time into microplastics. These contain toxic chemicals which are consumed by top predators including dolphins, seabirds, and even us.

What is the Government doing

The G7 leaders; an inter-governmental political forum consisting of seven countries, are committing to protecting the planet through a new partnership.  The leaders are working on a project called the G7 Summit whose aim is to transform the financing of infrastructure projects in developing countries. The UK has also launched a £500 million Blue Planet Fund to counter the negative effects of human activity on marine ecosystems. Furthermore, more countries are committing to ending unabated coal generation to reduce CO2 emissions with the UK being one of the first countries to do so.

What you can do

Saving our oceans requires a joint effort and each one of us can do something to contribute to this.

We know that it is almost impossible to completely eliminate plastic from our lives. However, try and do this wherever you can. For example, avoid plastic straws, cutlery, coffee cups, plastic water bottles, and plastic bags. Some of these products are already banned in certain countries including the UK with many sustainable alternatives available.

If you decide to visit the beach, whether that is in the UK or abroad, remember to dispose of all your trash. This is such a simple way of caring for the environment and not polluting the oceans. Next time you go to the beach, make sure you are not leaving anything behind.

Most of us rely on cars to get to work, visit friends and family members and to carry out a weekly shop. However, if possible, ride a bike, walk or use public transportation especially in large cities. These are sometimes much more affordable forms of transport which also reduce the amount of greenhouse gases released into the atmosphere.

Fish and seafood are present in many people's diets. However, we can all be more cautious about what we are putting into our bodies. Choose seafood that comes from well-managed, wild fisheries which is not only helping the oceans but is also healthier for you. Dedicate some time to reading about which seafood is best to eat and which labels to look out for when in a supermarket.

Celebrate the ocean month of June and discover the extensive range of sea creatures portrayed in our coins.