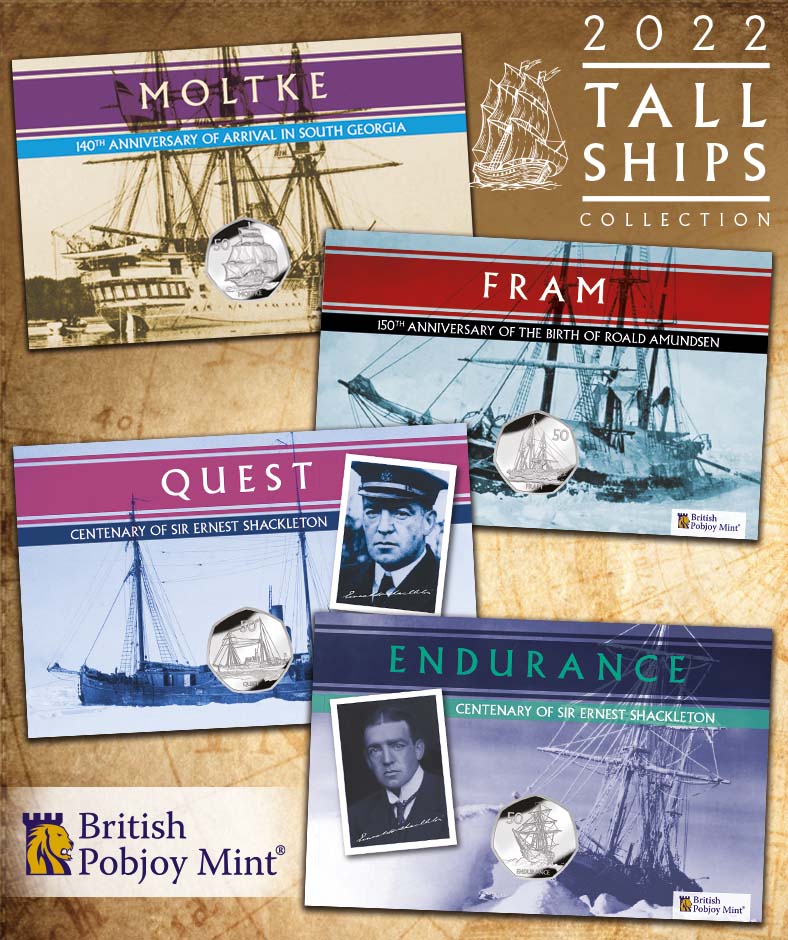 Our series of 50 pence coins featuring historical ships have proven to be extremely popular in the past and therefore, we have decided to bring the series back for 2022.

So far, we have released two coins in the series:

The first coin in this year's series, released on behalf of South Georgia and the South Sandwich Islands features the steam-powered ship Moltke launched in 1877 and built for the German Imperial Navy.

Moltke was a vessel of the Bismarck class and it was originally designed to serve as a fleet scout and to go on extended tours of Germany's colonial empire. But, it wasn’t until 1882, that it was deployed to carry the first German Expedition for the International Polar Year to South Georgia.

Moltke is an important part of the heritage of South Georgia & the South Sandwich Islands and represents a key moment in the island’s history.

The second coin in the series, released on behalf of the British Antarctic Territory features Fram, a three-masted schooner that was designed to withstand the freezing waters of the Arctic and Antarctic regions.

It was known to be able to crush a ship and was designed with a shape to let the ice push the ship up so it would “float” on top of the ice sheet. The ship is said to have sailed farther north and farther south than any other wooden ship.

The ship was used in many expeditions by Norwegian explorers Nansen, Sverdrup, Wisting, and, most famously, Roald Amundsen, between the years 1893 and 1912. After Amundsen’s Polar Expedition in 1912, the ship was retired and kept in storage until 1935 when it was finally put on display at the Fram Museum in Oslo, Norway.

Keep an eye out on the new releases page on our website!