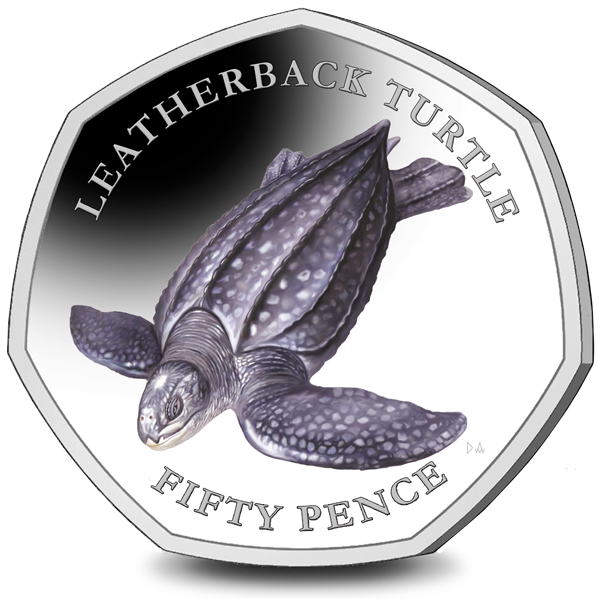 We are excited to share the release of the third coin in our stunning new 50p series that features the Turtles of the British Indian Ocean Territory. Sea turtles have fascinated people for a long time, and have appeared prominently in mythology and folklore within many cultures. Varying in shapes and sizes, sea turtles are one of the oldest reptiles in the world and can be found to inhabit tropical and subtropical seas throughout the world.

About the Leatherback Turtle:

This species of sea turtles have the widest global distribution and can be found in the tropic and temperature waters of the Atlantic, Pacific and Indian Oceans. This is because, unlike many other reptile species, the Leatherback turtle has the ability to maintain a warm body temperature even in cold water due to a unique adaptation that allows them to generate and retain body heat. They are known to travel incredibly long distances during their lifetimes, with some turtles travelling across entire ocean basins after they hatch.

Whilst being known to eat some plant material as part of their diet, their preferred meals, are by far, jellyfishes and other gelatinous animals. To keep their prey trapped, the Leatherback Turtle has specialised spikes in their mouths and throats to help ensnare their food. When foraging for their food, they have been found to dive down as far as 4,000 feet (1,200m) which is much deeper than any other turtle, or even most marine animals.

Though still considered as endangered, and vulnerable to extinction, in comparison to other species of sea turtles, the Leatherbacks numbers are actually in better shape.