The Most Popular Coins of Pobjoy Mint in 2018 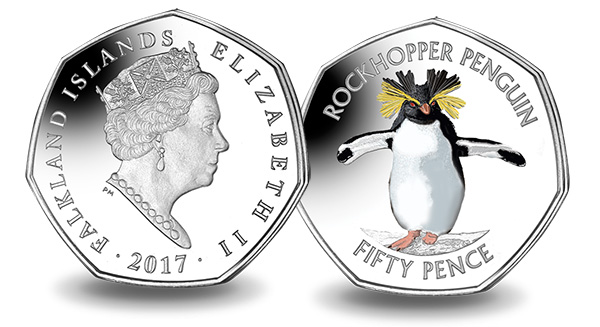 The Royal Wedding, Brexit negotiations, Britain’s huge success in this year’s World Cup … The year 2018 was a time of momentous triumphs and major events that are bound to leave a solid mark on both the UK history - and its future.

2018 was also an important year for Pobjoy Mint, as we released a number of coins; many of which quickly hit the top of the sales league table as our most successful and sought-after pieces!

With the current year drawing to a close, we decided to collaborate with our wonderful Facebook community on this year’s portfolio of coins, and asked them to vote for their favourite from our list of top 5 bestsellers of 2018.  Over 150 of our Facebook group members voted, and we can now reveal which of our 2018 ‘themed’ coins our coin-loving community deemed as their favourites.

Distributed since this year, and a runaway winner of the Facebook poll we held recently, the Father Christmas Coloured Proof Sterling Silver 50 Pence coin was struck on behalf of Gibraltar, with a limited mintage number of 4,500.

The coin embodies the illustrator Raymond Briggs’s vision of Father Christmas. The figure wears a satchel and flask, and carries a sack of presents over his shoulder.

The main inspiration for the Father Christmas 50p piece came from the children’s book, Father Christmas™ –by Raymond Briggs. His book hit the bookshop shelves in 1973, and almost immediately became a bestseller.
The reason for that could be Brigg’s unique approach to the main character, who besides looking like a ‘stereotypical’ Santa, appeared as a rather grumpy gentleman. This brought a refreshing take on the popular perception of Father Christmas.

The reverse side of this coin was embellished with the Pobjoy Mint effigy of Her Majesty Queen Elizabeth II.

The coin was officially approved by the Licensor and Buckingham Palace, and limited stock is still available to buy.

The Boaty McBoatFace 50 pence piece is the world’s first - issued on behalf of the British Antarctic Territory.

This unique coin was released in 2018 in relation to a campaign that was launched to name the United Kingdom’s climate and ocean research in Antarctica and the Arctic.

The main design features Boaty McBoatFace, the autonomous underwater vehicle (AUV) submerged in the Antarctic waters with the research ship RRS James Clark Ross shown above sitting among the icebergs, which make up the landscape of the Antarctic. Penguins can be seen swimming around Boaty McBoatface (a theme which also happens to be also one of the favourites of the Pobjoy community!).

This quirky yet catchy name was initially proposed in a March 2016 #NameOurShip poll but was eventually cast aside in favour of naming the ship after Sir David Attenborough, the famous British broadcaster and naturalist.

The Boaty McBoatFace 50p was struck with a limited mintage of 6,000, and it sold out within weeks of release!

These 50p pieces - featuring the Falkland Islands’s favourite residents, penguins - have been dominating the Pobjoy Mint bestselling coins chart for some time now.

The 2018 series embodies close-up headshots of the five most loved flightless birds that inhibit the Falkland Islands – the Southern Rockhopper,  Magellanic, King, Gentoo and Macaroni,  all struck in colour with great attention to detail.

The Pobjoy Mint Effigy of Her Majesty Queen Elizabeth II is shown on the obverse of the coin. You can also purchase the official Falklands Penguins II coin holder album to complement your collection – available here.

Pegasus is one of the best-known creatures in Greek mythology, and it has been extremely popular with the Pobjoy community in 2018. This winged horse is usually depicted as white in colour and was always considered a kind-hearted and gentle animal that symbolised speed, strength and artistic inspiration.

Available fine 999.9 gold bullion coin as well as in Virenium (an exceptional alloy developed and produced exclusively by Pobjoy Mint), the Pegasus coin was the Pobjoy’s community’s fourth favourite coin of 2018. We suspect one of the reasons for its popularity is that it makes a superb add-on to any numismatic collection, thanks to its uniqueness.

The Pegasus 2018 Virenium Coin is available in the limited mintage of 4,000, while the gold bullion version issue is limitless. Both coins have been issued on behalf of the British Virgin Islands.

There is also a Silver Bullion version with a reverse frost effect and an issue limit of 50,000 for those silver stackers. Order here.

The final choice of the Pobjoy coin collectors community in 2018 is the coloured Gibraltar Primates coins, issued in 2018 with a restricted mintage of 7,500 each.

The 50p coins make a perfect addition to both adult or kids numismatic collection, as they feature three ‘Old World’ monkey species living in Africa as well as the famous Barbary Apes of Gibraltar. The population in Gibraltar is the only such population outside of the Northern Africa and the only population of wild monkeys in Europe.

The range includes the Gibraltar Barbary Ape, Baboon, Red Colobus Monkey and Chimpanzee, with all the coins available in colour to imperil that primates are really brought to life and highlight the fact that these stunning animals are in danger of becoming extinct.

To secure your one-off collection, you might be also interested in purchasing the Gibraltar Primates 50p Coin Series Album – specially designed to protect your coins and proves their authenticity.

We’d like to take this opportunity to thank everyone who voted in our Facebook group poll, and for your continued support of Pobjoy’s coin collections.