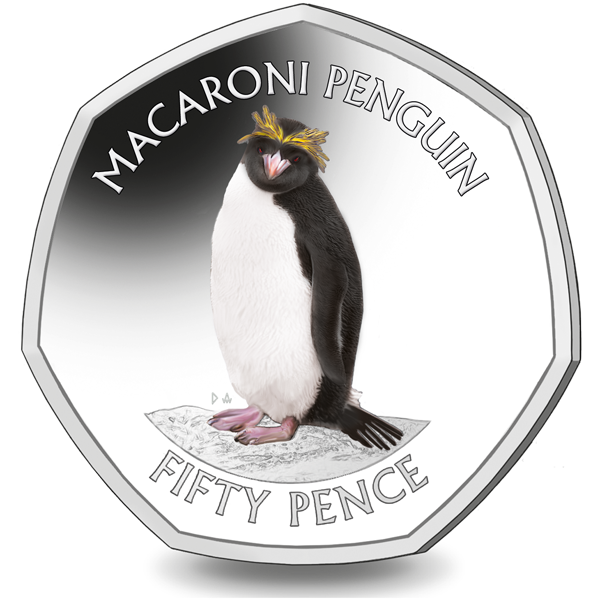 The Penultimate Penguin 50p Coin is Out Now!

Our stunning new 50 pence coin features a single adult Macaroni Penguin. This beautiful series is available in Cupro Nickel Diamond Finish with each Penguin being portrayed in colour. A certificate of authenticity will also be provided with each coin. The obverse of the coin features the Pobjoy Mint Exclusive Effigy of Her Majesty Queen Elizabeth II.

About the Macaroni Penguin:

The Macaroni Penguin was given its name by early English explorers who compare the orange/yellow plume feathers of the Macaroni Penguin to the feathers found in a hat known as a "Macaroni". These orange feathers make this penguin stand out from the rest as they are often striking against the penguins' environment.

Macaroni Penguins are known to spend 6 months at sea whilst foraging for food. On their dives for food, they can reach anywhere from 15 to 70 metres (49 to 229 feet) but have been recorded diving as deep as 100 metres (330 feet). They are believed to be the largest consumer of marine resources of all sea birds, eating tons of krill per year.

Fun Facts about the Macaroni Penguin: