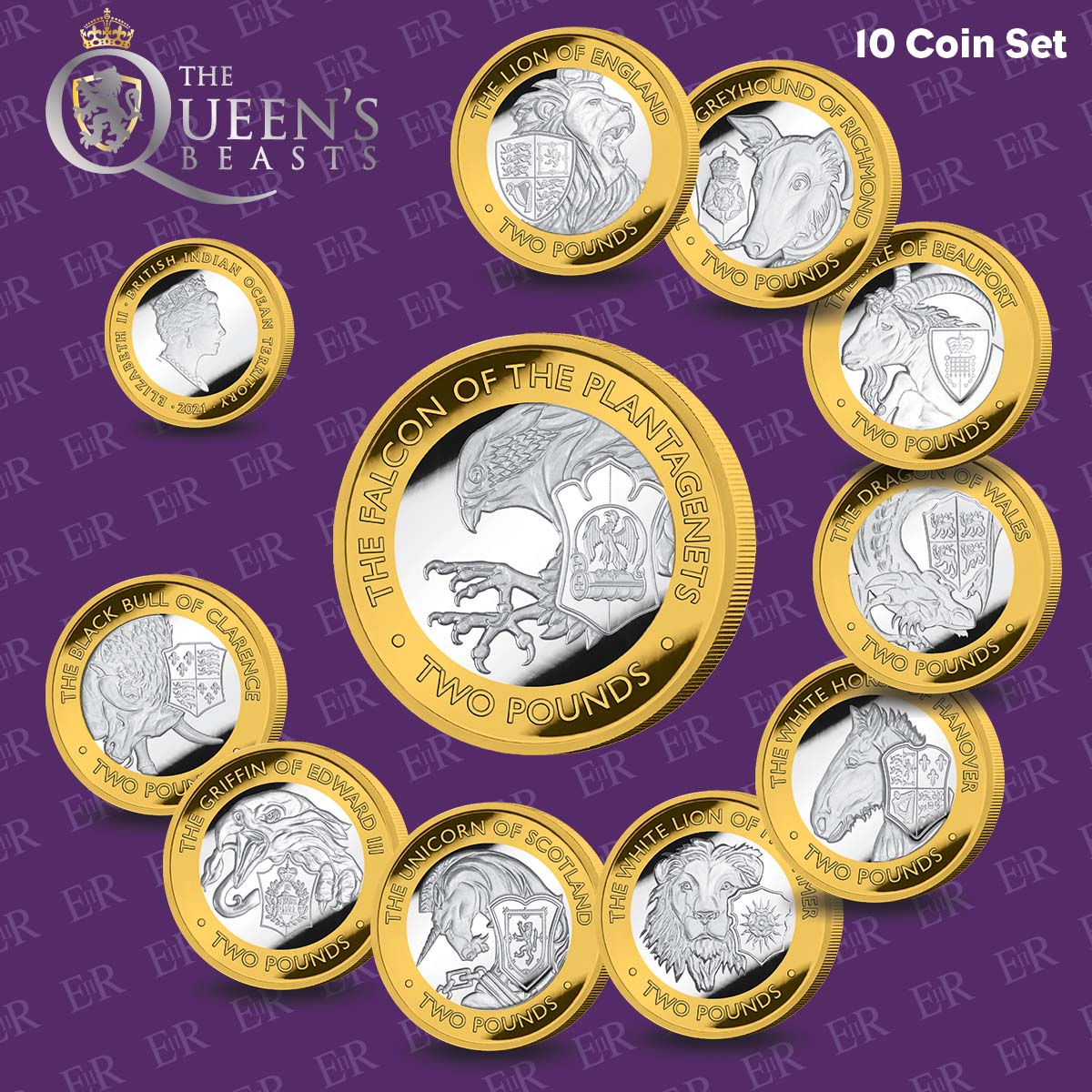 2021 marked HM Queen Elizabeth II's 95th Birthday, and in celebration of this, Pobjoy Mint released a 10 coin series depicting the Queen’s Beasts on behalf of the British Indian Ocean Territory.

The Queen’s Beasts are 10 heraldic statues that represent the genealogy of HM Queen Elizabeth II, with each beast depicting a Royal Supporter of England. Upon HM Queen Elizabeth II's coronation in 1953, they stood in front of the temporary western annex of Westminster Abbey and were originally uncoloured except for their shields.

Here are the ten Queen's Beasts coins featured in this series in order of their release:

The first coin in the exciting new collection features the crowned golden lion of England, which has been one of the supporters of the Royal Arms since the reign of Edward IV.

Edmund Tudor, Henry VII’s father, was the first to be created Earl of Richmond and the white greyhound was associated with the Honour of Richmond. During his reign, Henry VII officially replaced the English Lion with the White Greyhound in the coat of arms of England, which eventually were used on all his standards.

The Yale of Beaufort has been used as a supporter for the arms of John, Duke of Bedford, and by England's House of Beaufort. Its connection with The Queen began with Henry VII in 1485. Henry Tudor’s mother, Lady Margaret (1443–1509), was a Beaufort, and the Beaufort heraldic legacy inherited by both her and her son included the Yale.

The Red Dragon is a mythical creature widely associated with strength, wisdom, and power and represents the nation of Wales (in views of the Welsh Heritage Henry VII had). Its use as a heraldic symbol dates back to AD 829 when it was the battle standard of King Arthur and other ancient Celtic leaders.

The White Lion of Mortimer’s relation to The Queen comes from Edward IV through Anne de Mortimer. The Lion’s history extends over 500 years and unlike the Lion of England, this beast is uncrowned.

The Unicorn of Scotland’s relation to the Queen comes from James I, the first Stuart king of England who ruled a unified England and Scotland in the 17th century. The unicorn is one of the Queen’s Beasts but it is also the national animal of Scotland.

The Griffin of Edward III’s relation to the Queen comes from King Edward III, founder of the Order of the Garter who engraved the Griffin on his private seal. Edward III, also known as Edward Windsor, used the seal bearing the image of the griffin for 20 years. It is said that he had bed linen and robes embroidered with the beasts. His private seal used to be the most powerful and authoritative symbol of royal identity.

As a symbol of power and might, the Black Bull of Clarence is related to the Queen through Edward IV, the first King of England from the House of York. Edward IV took power from Henry VI in 1461 and overturned a troubled Lancastrian rule over England resulting in a period of relative peace. It is said that Edward IV, along with his brother Richard III, often used the bull as a symbol during his reign.

10.   The Falcon of the Plantagenets

As a symbol of freedom and victory, the Falcon of the Plantagenets is passed to the Queen through Edward III, who used it first from the House of Plantagenets as his badge due to this love of hawking. It descended to Edward IV, who then took it on as his personal badge, with the falcon standing within an open fetterlock. Originally depicted as closed, the change to open referred to the struggle Edward IV had to obtain the throne.

Take a look at the Queen’s Beasts coins still available to purchase on our website! 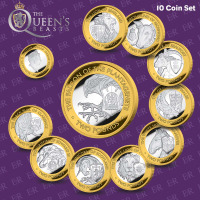