The World of King Tutankhamun in Coins 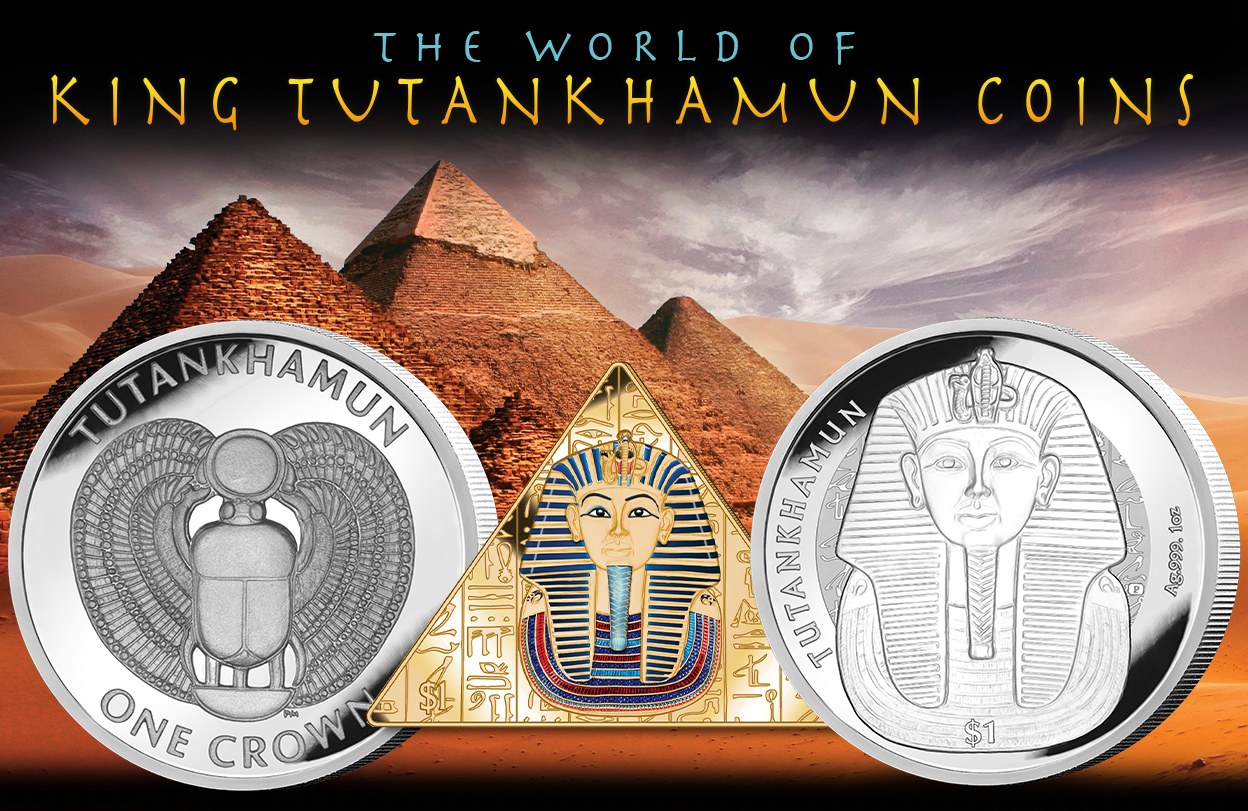 Many memorable events and anniversaries have taken place this year, including the commemoration of the Centenary since the Discovery of King Tutankhamun's Tomb. Following on from our 2008 Isle of Man Tutankhamun releases, a grand total of four new Tutankhamun coins have been released this year alone, three 2022 dated coins and one 2023 dated coin. All new coins take inspiration from the original 2008 coins and were released in celebration of the discovery.

Explore all our Tutankhamun coins below!

King Tutankhamun was an Egyptian ruler who was thought to have been in power at the end of the 18th Dynasty from 1341 B.C, up until his death in 1324 B.C aged 19. Tutankhamun’s recognition was minute in comparison to his successors. However, at the time of his rule the young king was often praised by the people of Egypt for amending his predecessor’s wrongdoings and reforming Egypt after it had been left in turmoil at the hands of Akhenaten.

Although Tutankhamun may have left an impression in the eyes of his people, the popularity of the young Pharaoh only arose on a global scale as the result of the exploration of the various royal burial grounds by Europeans, more than 3000 years after his death. The fascination with Tutankhamun as we know it today didn’t necessarily stem from the king himself but more so from his Tomb. Tutankhamun’s Tomb was discovered in 1922 almost completely intact in the Valley of the Kings, Luxor, by English archaeologist and Egyptologist Howard Carter. These findings proved significant for archaeologists as it spurred renewed interest in Ancient Egypt and the marvels of Luxor, making ‘Howard Carter’ and ‘Tutankhamun’ the renowned household names they are today.

Centenary of the Opening of Tutankhamun's Tomb - Reverse Frosted Silver Bullion $1 Coin - SLE  - This stunning bullion coin design features the ‘Death Mask’ of Tutankhamun with hieroglyphics in the background and the wording “TUTANKHAMUN” in the surround. It also features a silver bullion privy mark “P” which is exclusive to Pobjoy Mint Bullion coins. The obverse of the coin features the Coat of Arms of Sierra Leone with a frosted background. 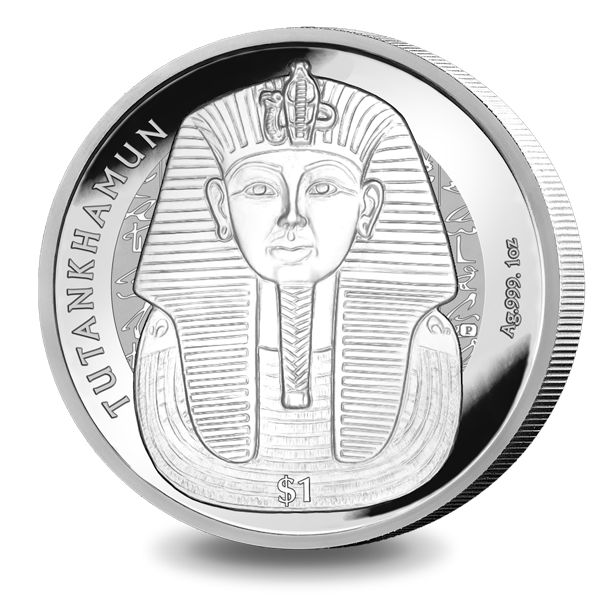 Centenary of the Discovery of Tutankhamun Tomb - 1oz Silver with Sand Coin (US Exclusive Only) - SLE  - This brand new coin has been created in a unique triangle shape to emulate the Egyptian pyramids and features Tutankhamun’s glorious funerary mask surrounded by hieroglyphics. To make this coin unique, sand from the boy kings tomb in the Valley of the Kings was collected by Taya Pobjoy, Managing Director of Pobjoy Mint and has been encapsulated behind a thin plate of glass. The obverse of the coin features the Coat of Arms of Sierra Leone surrounded by hieroglyphics. 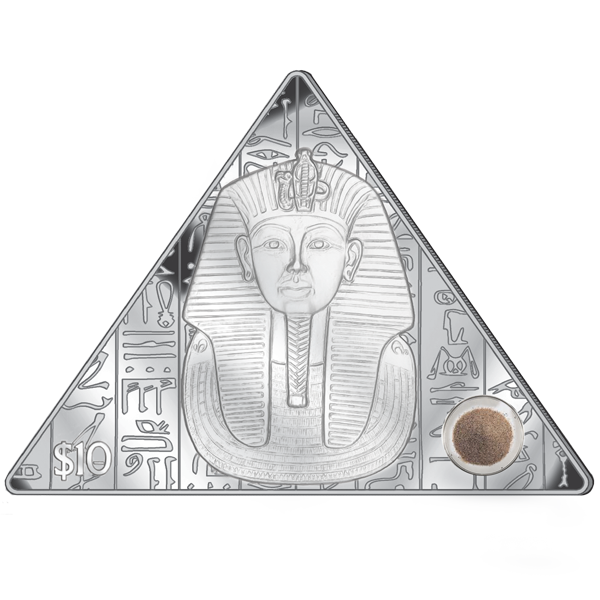 Centenary of the Discovery of Tutankhamun's Tomb - Gold Plated Bronze Pyramid Shaped $1 Coin - SLE - This coin design has been produced in Bronze and features the ‘Death Mask’ of Tutankhamun with hieroglyphics in the background. It has been created in a unique pyramid shape which has then been Goldclad® and coloured. The obverse of the coin features the Coat of Arms of Sierra Leone surrounded by hieroglyphics. 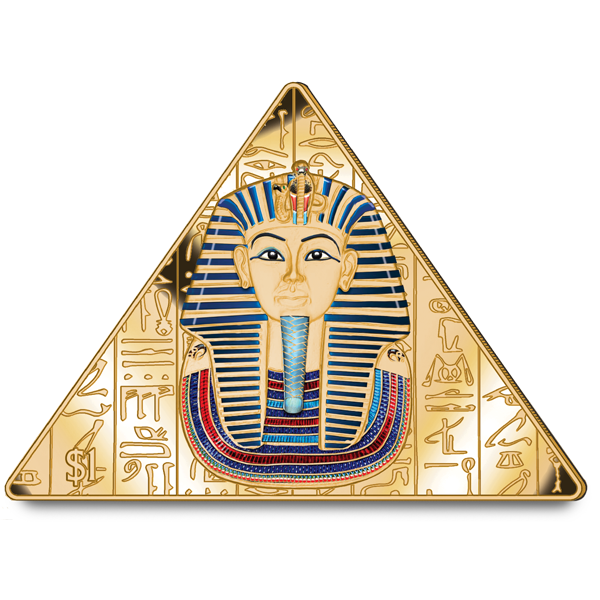 Centenary of the Discovery of Tutankhamun's Tomb Set - Virenium® Complete 3 Coins Set - SLE - This set features the Death Mask, the Coffinette and the Throne. These coins are available as a shaped $1 and produced in Virenium®. Each coin is individually presented in a Pobjoy Mint presentation pack. The obverse of each coin features the Coat of Arms of Sierra Leone. 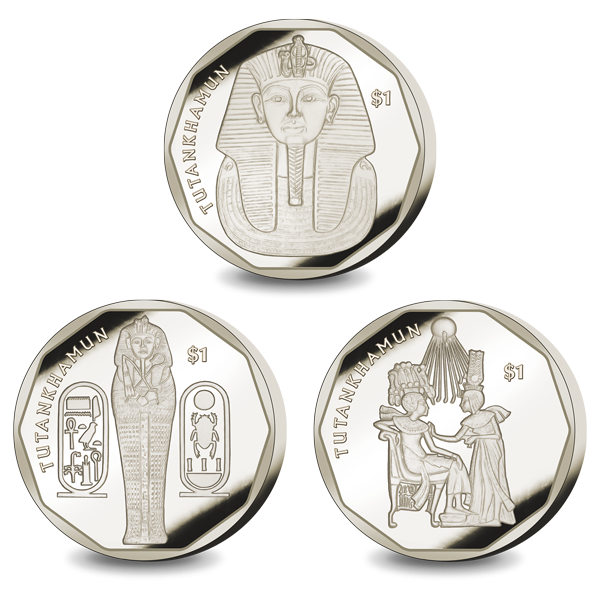 World's First pyramid Shaped Coin Encapsulated with Sand - Proof Fine Silver - IOM - The central image for this coin depicts the Pharaoh with his cartouche being welcomed by Anubis – God of the Underworld and Hathor - Goddess of Love and Beauty who is offering Tutankhamun the ‘key of life’. Two baboons appear on either side representing the 12 hours. The sun disc appears at the top of the design and is where the magical ancient sand from Tutankhamun’s tomb appears encapsulated by a sheet of glass. The obverse of the coin features an effigy of Her Late Majesty Queen Elizabeth II surrounded by a pattern of hieroglyphics and the word Tutankhamun. 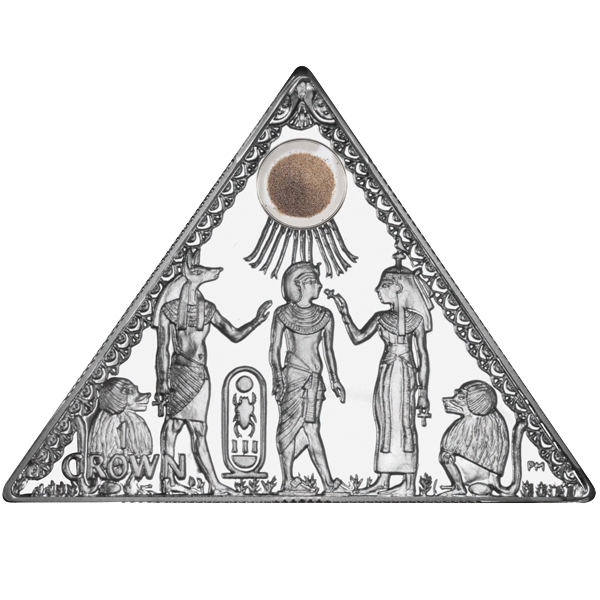 Tutankhamun Eye of Horus - Unc. Cupro Nickel Crown Coin - IOM - This Coin Features the Eye of Horus framed by vulture goddess Nekhbet on the left, who is said to symbolise purification, and cobra goddess Wadjet on the right, who is often seen as the protector. The obverses of this coin features an effigy of Her Late Majesty Queen Elizabeth II. 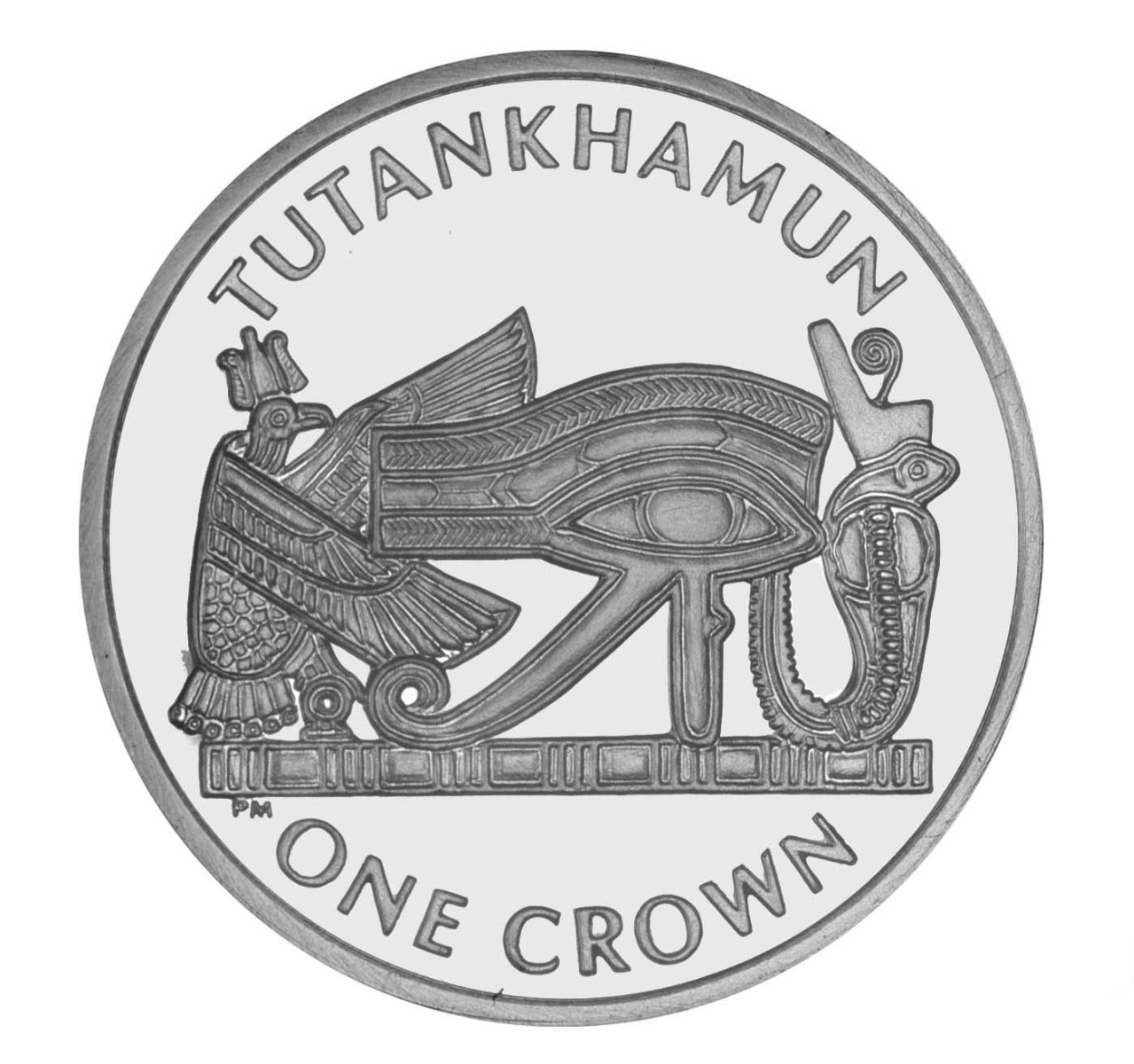 Tutankhamun The Scarab - Unc. Cupro Nickel Crown Coin - IOM - This coin features the winged scarab taken from a pectoral unearthed from Tutankhamun’s tomb. Symbols on this piece of jewellery spell out the pharaoh’s throne name Nebkheperure. The obverse of this coin features an effigy of Her Late Majesty Queen Elizabeth II. 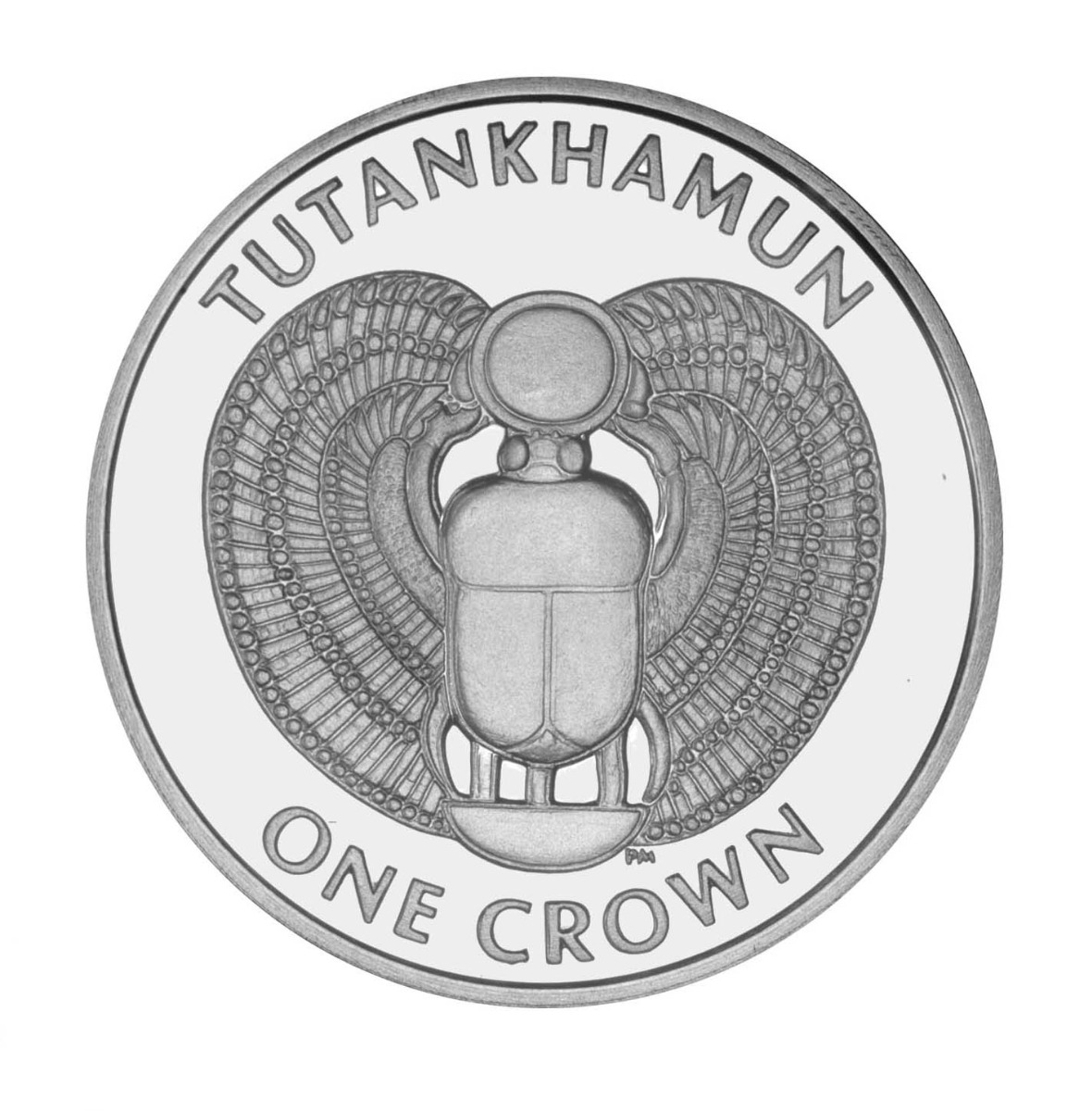 Tutankhamun's Canopic Coffinette - Bronze Pyramid shaped Coin in Pack - IOM - This pyramid shaped coin features one of Tutankhamun’s coffinettes in the centre with two cartouches - one on each side - which spell in hieroglyphics the young pharaoh’s birth name Tutankhamun, as well his throne name Nebkheperure. The obverse of this coin features an effigy of Her Late Majesty Queen Elizabeth II. 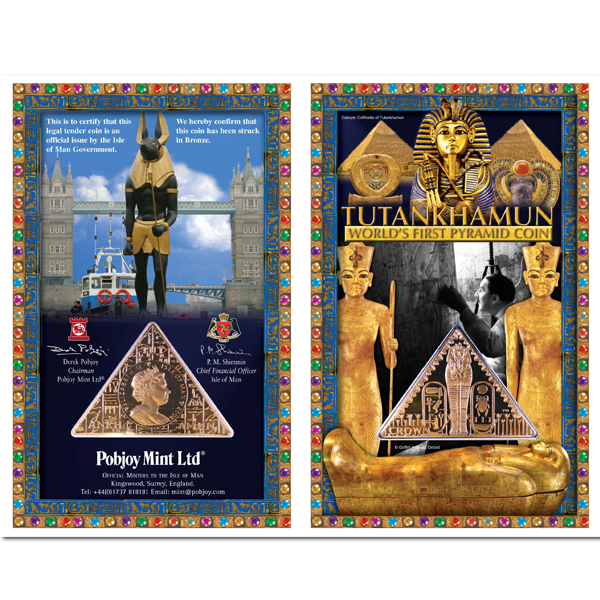 Tutankhamun's Death Mask - Bronze Pyramid shaped Coin in Pack - IOM - This coin features the most renowned of all the artifacts recovered from the boy king’s tomb, Tutankhamun's Death Mask. Although the mask was deemed too precious to travel to London, no coin collection would be complete without it, so we have produced a unique pyramid shaped coin depicting the Death Mask in Bronze. The obverses of this coin features an effigy of Her Late Majesty Queen Elizabeth II. 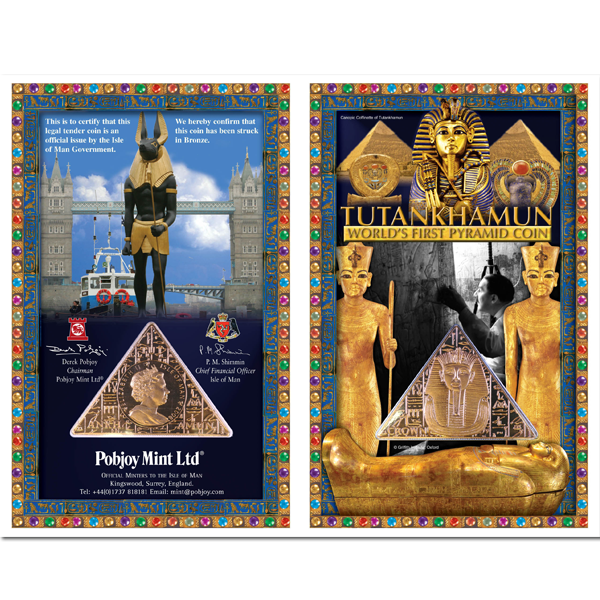 Keep up-to-date with our latest release by visiting our 'New Releases' page!