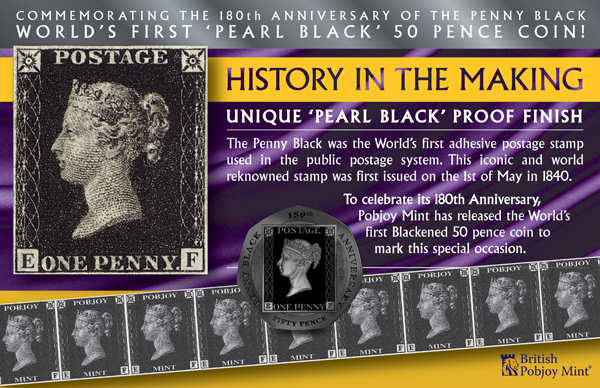 Pobjoy Mint is delighted to announce the release of the World's very First Pearl Black 50p Coin in celebration of the 180th Anniversary of the Penny Black Stamp.

What is the Penny Black Stamp?

The Penny Black Stamp is famously known as the world's first adhesive postage stamp to be used in the public postal system. In the United Kingdom, it was first issued on the 1st of May, however, was not valid for use until May 6th.

Why the Penny Black Stamp was Introduced:

Sir Rowland Hill proposed to the government enquiry for there to be a way for pre-payment of postage. At the time, British postal rates were high and complex, and so the Penny Black would allow for letters (up to 14g) to be delivered at a flat rate of one penny, regardless of distance.

Back in 1990, Pobjoy Mint issued a coin which was considered to be the most innovative of its time and in fact was awarded no less than THREE Coin of the Year Awards; Best Crown, Most Innovative Coinage, and overall Coin of the Year.

The Coin in question was produced to commemorate the anniversary of the world's first adhesive stamp, the Penny Black. Introduced in Britain by the famous reformer, Rowland Hill, the stamp made philatelic history, with a beautiful but simple design by Henry Corbould. The stunning design featured a portrait of Queen Victoria.

To commemorate the 180th Anniversary of the Penny Black Stamp, the 1990 50 pence coin has been reproduced using the same design, however, for 2020, there has been a change of anniversary and denomination.

This coin will be produced in Cupro Nickel Diamond Finish, Proof Sterling Silver, and Proof Silver Piedfort, but to make this coin extra special, all will be produced with a lustrous Pearl Black Finish, a special technique adopted by Pobjoy Mint in order to create this beautiful effect which is in fact complemented by the incused rim. The obverse of the coin features the Pobjoy Mint Exclusive Effigy of Her Majesty Queen Elizabeth II.

To commemorate this special occasion, the Cupro Nickel Diamond Finish 50 Pence Coin will be presented in a special anniversary pack.