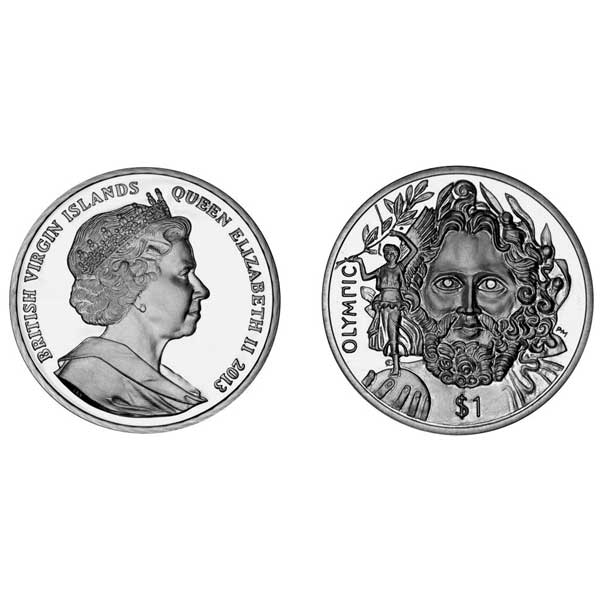 While sports enthusiasts around the world are gearing up for the 2018 Winter Olympics, many numismatic collectors are waiting to get their hands on the officially released Winter Olympic Games coins to commemorate this event.

The 2018 Winter Olympics will take place from 9 to 25 February 2018 and will be held in Pyeongchang, South Korea. The Olympics comprises of 102 events across seven sports and will be followed by the 2018 Winter Paralympics, which are scheduled to start on Thursday, 8th March.

Prior to those exciting and challenging events, why not take a sentimental look at the previous Olympic coins released by Pobjoy Mint to commemorate both the winter and summer games from the past?

Released on behalf of the British Virgin Islands, this beautiful uncirculated cupro nickel coin has been embellished with the image of one of the most exciting 2016 Rio Olympic Games – Beach Volleyball.

The main part of the coin features female volleyball players diving for the ball along with a lady in full Rio Carnival costume in the background.  The obverse illustrates an effigy of Her Majesty Queen Elizabeth II.

To add more charm, this $1 piece was decorated with two ribbons that carry fully coloured flags of both Brazil and the Union, making the coin a great addition to any numismatic collection.

You can order the Coloured Beach Volleyball coin here.

This unique set of 4 uncirculated cupro nickel coins has been issued on behalf of Isle of Man to commemorate the 2014 Sochi Winter Olympics – the first Winter Olympics Games held in Russia since the break-up of the Soviet Union.

The leading design of the coins embodies four winter sports – The Luge (introduced to the Winter Olympic Games in 1964), Figure Skating (introduced in 1908), Curling (involved since 1998) and Alpine Skiing (since 1936).

To express the atmosphere of Winter Games even further, the coins have been decorated with three, sky-blue snowflakes, giving each piece an impression of a frosty appearance.

All four coins from this Coloured Winter Olympics Set have been produced from uncirculated cupro nickel crown with unlimited issue. Order your set from Pobjoy Mint today.

To memorialise the 150th Anniversary of Baron Pierre de Coubertin, also known as the “Father of the Modern Olympics”, Pobjoy Mint has released an exceptional set of two collector’s coins with a total issue limit of 2,000.

Each coin features the portrait of Zeus, in whose honour the ancient Olympic games were held, along with his hand holding a globe and the traditional olive branch of victory above.

As per first modern Olympic Games in 1896, both Fine Proof Sterling Silver $15 and Copper $1.50 coins have been produced using the same design, material and diameter of 48mm as the medals awarded to the winners and runners-up, making the coins a very desirable piece of history.

Order your unique Father of the Modern Olympics set here.

This unique 6 coin set, issued on behalf of Isle of Man in 2012,  is a celebration of the Summer Olympic Games that took place in London in 2012 and also commemorates Her Majesty Queen Elizabeth II’s Diamond Jubilee Year.

Each of the Proof Sterling Silver Crown coins was embellished with two different events within the same sport, making them a wonderful record of the greatest sports of our lifetime. The Olympic sports illustrated include Equestrian, Cycling, Indoor Water Sports, Outdoor Water Sports, Contact Sports and Tennis.

The obverse shows a recent portrait of the Queen, blended with an earlier portrait taken early during her reign.

All the coins have been carefully struck four times to give a unique impression of double effigy along with the Pobjoy proof finish and have a limited issue of 10,000, so hurry up and secure your unique set today.

Produced on behalf of Fiji, a two-coin set is celebrating both the Ice and the Snow events to take place in Pyeongchang this year and the coins feature two popular sports – Bobsleigh and Figure Skating.

Made of Proof Sterling Silver, each $2 coin has been split horizontally to give a unique effect. On the upper half, the professional athletes are frosted in relief with a sleek background, while the illustration shown in the lower half of the coin utilises reverse frosting to give the appearance of the snow or ice upon which the sport takes place.

2018 Winter Olympics Games: Ice and Snow Sports coins have a low limit issue of 2,000, secure yours today from Pobjoy Mint.