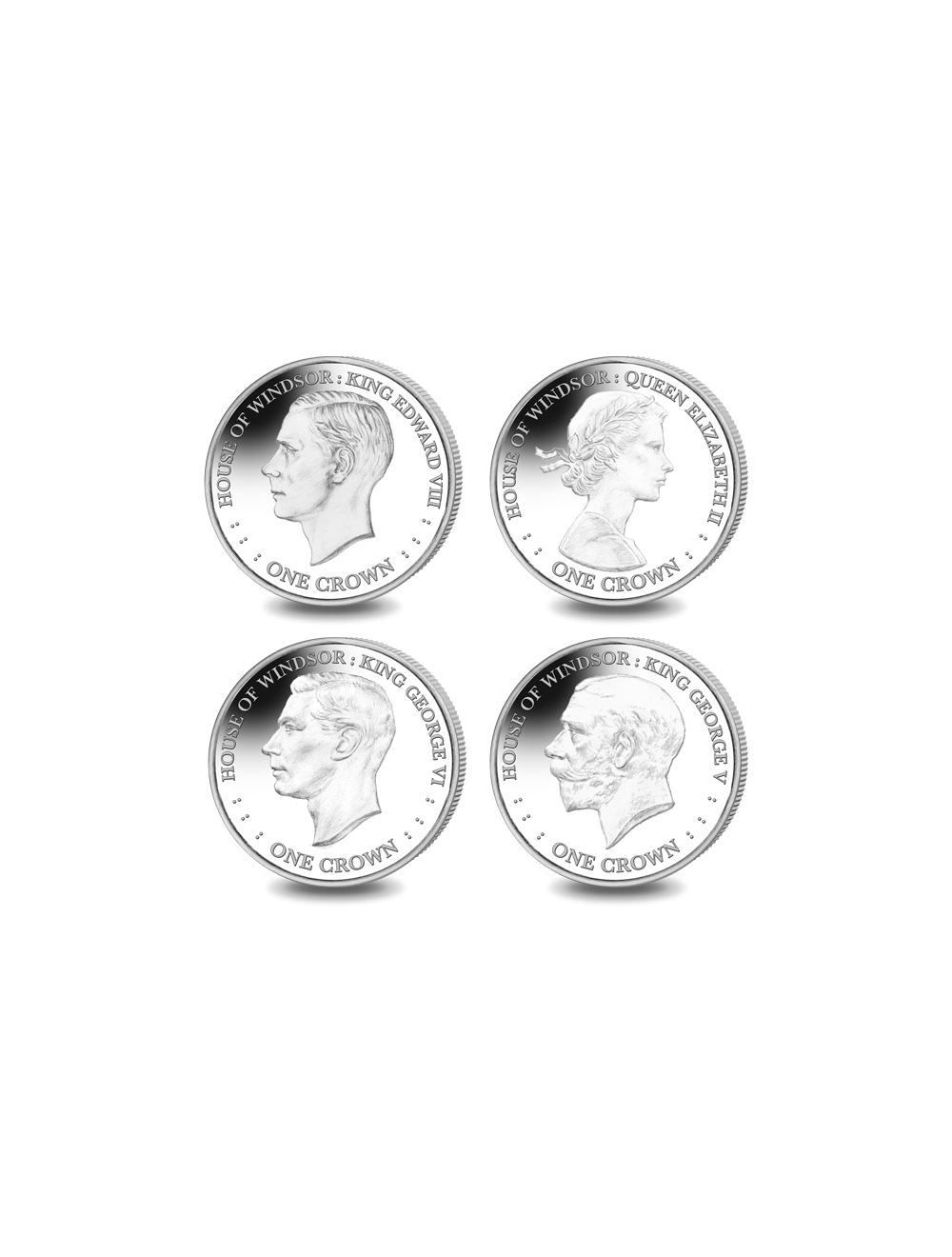 The House of Windsor has had a monumental impact on Britain over that last 100 years and in order to celebrate the amazing work that they have done on behalf of the country, Pobjoy Mint is releasing a four coin set which features portraits of the four Monarchs. The portraits used are based on coinage issued during the time of their reigns. In the case of HM Queen Elizabeth II, we have based this on coins from the beginning of her reign (Also known as a ‘young head’).

Together these four coins make a beautiful set with an immense amount of history surrounding them and we are confident this will make it a highly desirable addition to any collection.  The denomination of each of the coins is ‘1 Crown’ and the obverse features the Exclusive Pobjoy Mint Effigy which captures HM Queen Elizabeth II in fine detail. Issued on behalf of the Falkland Islands.

2017 marks the Centenary of the formation of the House of Windsor. This was the decision of George V when he gave up his German family name of ‘Saxe-Coburg-Gotha’, which had come to the family in 1840, with the marriage of Queen Victoria to Prince Albert.

The primary reason for this change was that ‘Saxe-Coburg-Gotha’ was German name and as Britain was fighting the Germans in the First World War, it is thought that George V concluded this would be a very inappropriate family name to rule the nation.  In addition to this some of the German planes that were heavily bombing London at this time where called the Gotha G.IV which most certainly added fuel to the fire.

George V – The founder of the House of Windsor and the man who during the First World War proved a great Monarch and role model to Britain. He also had a very active role in improving the popularity of the Monarchy and even placed Buckingham Palace on austerity footing whilst he and The Queen conducted morale boosting tours.

Edward VIII – Acceded to the throne in 1936 but was never formally crowned. He faced a difficult decision between his public duties and a life with his partner Wallis Simpson, who was deemed unsuitable to marry a royal. Therefore in his Abdication speech in the December of 1936 he formally declared that he and any children he may have would not take the throne. This allowed his younger sibling Prince Albert to become King and, using his last name, became King George VI.

George VI – George VI never expected to be king but following his brother’s abdication, he acceded in the December of 1936.  He overcame a speech impediment and his shy nature and with the help of his wife Lady Elizabeth Bowes-Lyon, became a strong figurehead during the Second World War, refusing to leave London during the Blitz.  George VI passed away in 1952 and was laid to rest in St. George's Chapel, Windsor Castle.

Queen Elizabeth II – Crowned at the young age of 25, HM Queen Elizabeth II is now Britain’s longest reigning monarch and will be celebrating the Sapphire Anniversary of her Coronation in 2018. She has dedicated her life to the nation and has travelled all across the world attending countless public engagements each year.