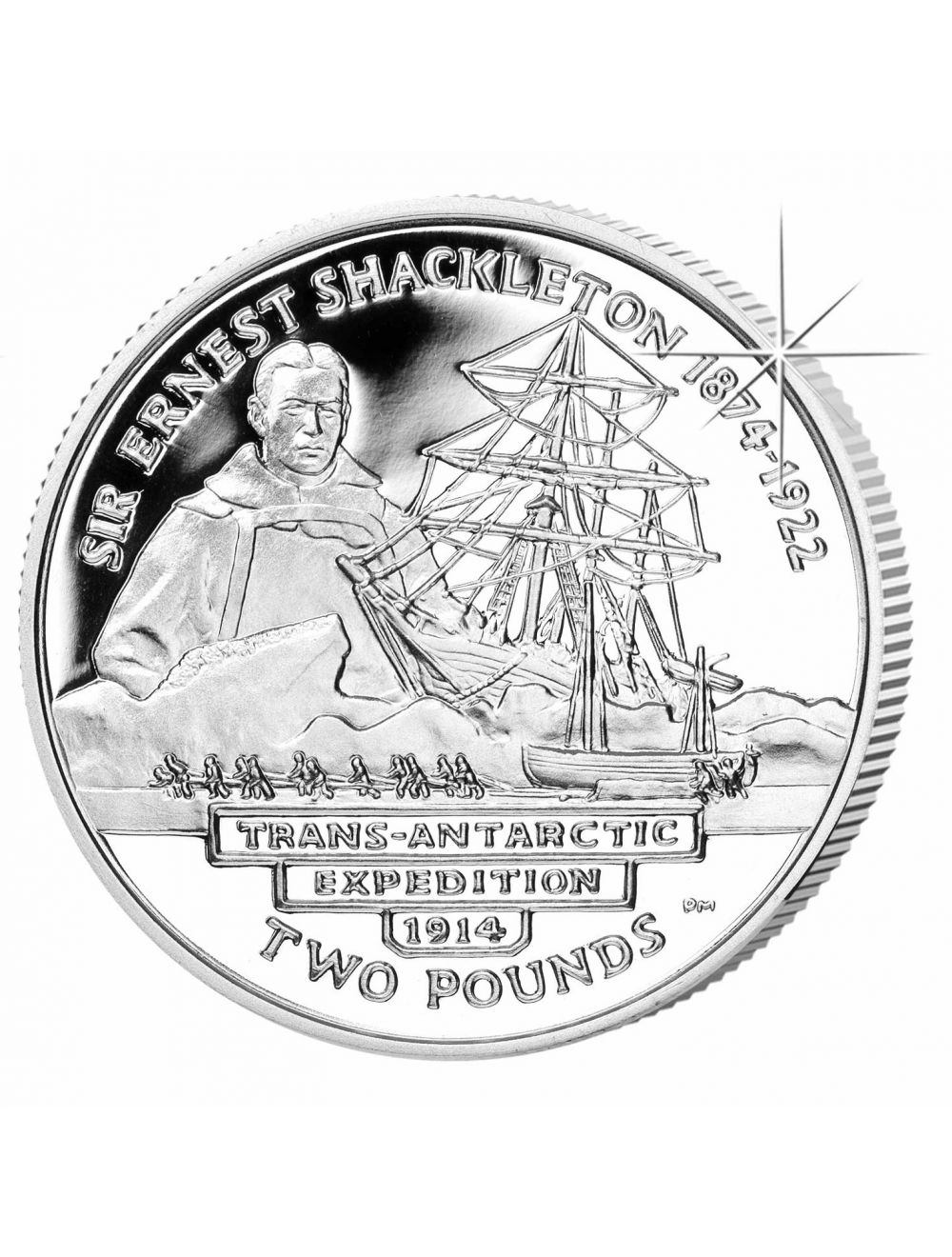 To commemorate the 90th Anniversary of Sir Ernest Shackleton’s Trans-Arctic Expedition, the Government of South Georgia & South Sandwich Islands has approved the release of a stunning new coin featuring the famous explorer.

Ernest Henry Shackleton was born in County Kildare, Ireland on 15th February 1874.  His family settled in England when he was 10 years old and he later attended Dulwich College.  Even though Ernest’s father wanted his son to enter the medical profession, Ernest had other ideas and at the age of 16 he went to Liverpool and joined the North Western Shipping Company of Liverpool where he spent 5 years sailing to and from America and the Far East on the ‘Houghton Tower’.  By the age of 24, Ernest Shackleton had qualified to command a British ship anywhere on the seven seas.  In September 1900, he wrote to volunteer for the National Antarctic Expedition.  Later that summer, Shackelton departed with Scott on the historic ‘Discovery’ Expedition to Antarctica but unfortunately he became seriously ill and had to be invalided home.

The coin itself carries a portrait of Sir Ernest Shackleton with an image of ‘The Endurance’ stuck in the ice pack.  In the foreground is an impression of the crew pulling one of the lifeboats across pack ice.  The obverse of the coin carries an effigy of Her Majesty Queen Elizabeth II by Ian Rank-Broadley FRBS FSNAD.

Clearly fascinated by the Antarctic, Shackleton departed from England in August 1914 to make the first of its kind land crossing of Antarctica.  However, around 60 miles from where they planned to drop anchor, their ship, ‘The Endurance’, became trapped in an ice pack.  They spent the winter trapped in the ice until the ship was crushed which left them marooned with only three life boats and any provisions they had saved.  Shackleton and a few other men sailed one of the lifeboats 800 miles to South Georgia where they knew a whaling station was located.  It took several months to reach the remaining men because of the ice packs but they were eventually reached in August 1916.  Amazingly, not one life was lost during this time.  Ernest Shackleton continued to return to the Antarctic and in January 1922 he anchored off the coast at Grytviken in South Georgia.  In the early hours of 5th January, Sir Ernest Shackleton suffered a heart attack and he was buried in the Whalers Cemetary at Grytviken.