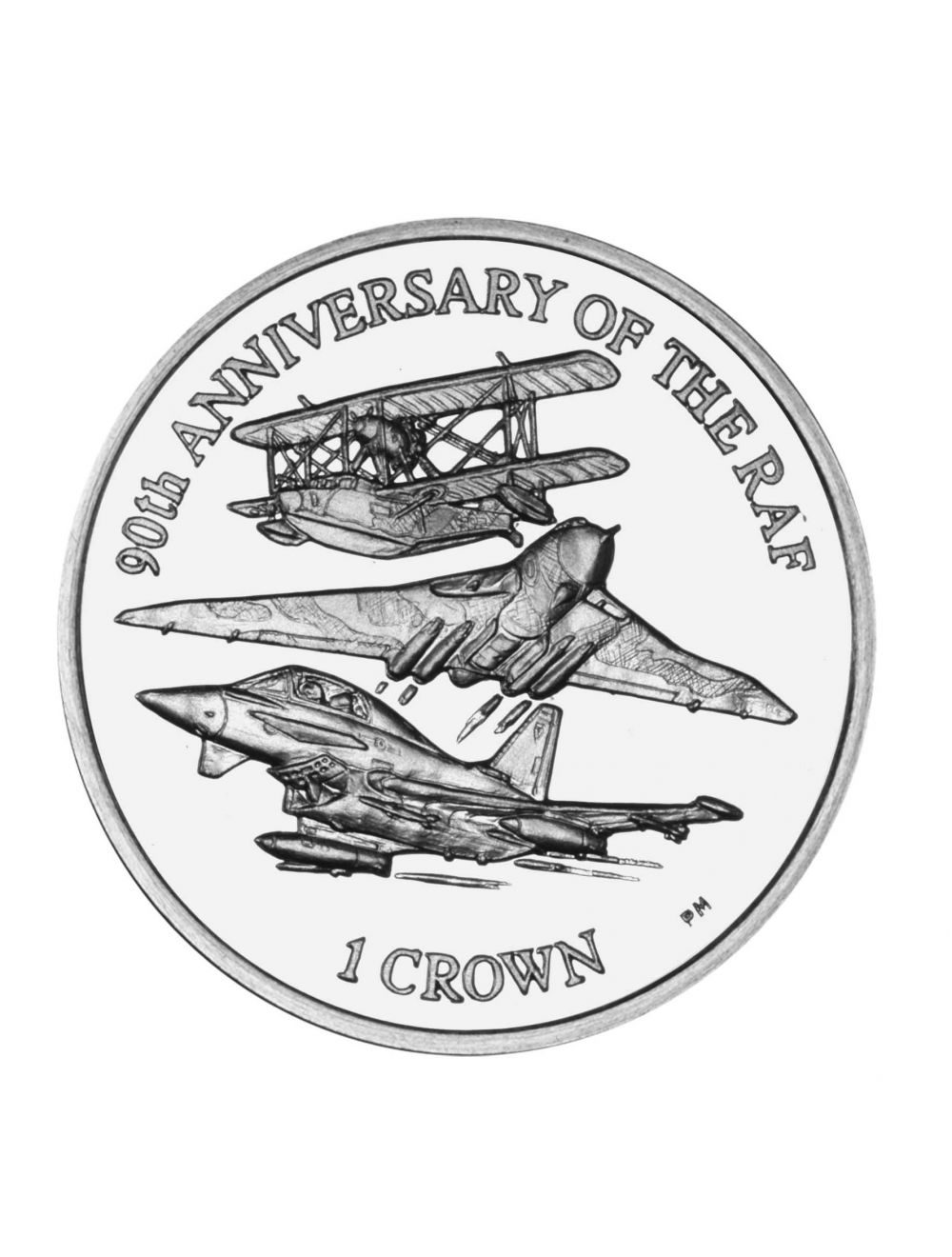 To commemorate the 90th Anniversary of the Royal Air Force, Pobjoy Mint has produced a spectacular coin on behalf of the Falkland Islands Government.  The Royal Air Force came into existence on 1 April 1918 by the amalgamation of the Royal Flying Corps and the Royal Naval Air Service.  The RAF is the world's oldest air force of any significant size which is independent of any army or naval control.  During World War I air power proved to be a strong defensive force and the newly formed RAF became a respected and formidable force.

Throughout the inter-war years the RAF had to prove that there was still a need for an independent air force especially during peacetime.  In order to keep themselves in the public eye and avoid being disbanded and its duties returned to the Army and Navy the RAF began trying aviation record attempts.

The design depicts three aircraft in flight, a Vulcan Bomber, a Eurofighter Typhoon and a Walrus and the wording in the surround reads ‘90th Anniversary of the RAF’.  The coin is available in Unc. Cupro Nickel, Proof Sterling Silver and 1/5 Proof Fine 999.9 Gold.  The precious metal versions have been struck four times to achieve the excellent Pobjoy Proof finish.  Approved by Buckingham Palace the obverse of the coin carries a fine effigy of Her Majesty Queen Elizabeth II by Ian Rank-Broadley FRBS FSNAD.

Following the outbreak of the Second World War the RAF underwent a rapid expansion involving recruitment from British Commonwealth countries, the secondment of many whole squadrons, and tens of thousands of individual personnel, from Commonwealth Air Forces.   Added to these groups and other British Commonwealth personnel were men from other countries, including many who had fled from German-occupied European countries.

Over the years there have been great technological advances in warfare allowing the RAF to play a significant role in defending the United Kingdom and other countries including the Cold War between 1945 and 1990, the Falklands War in 1982, the Gulf War in 2003, and currently in the fight against the Taliban.  The 90th Anniversary was also commemorated by the RAF by an impressive fly-past of Red Arrows and Typhoons, which started south of London City Airport, passing the O2, Canary Wharf, Tower Bridge and Tate Modern before flying over the London Eye.