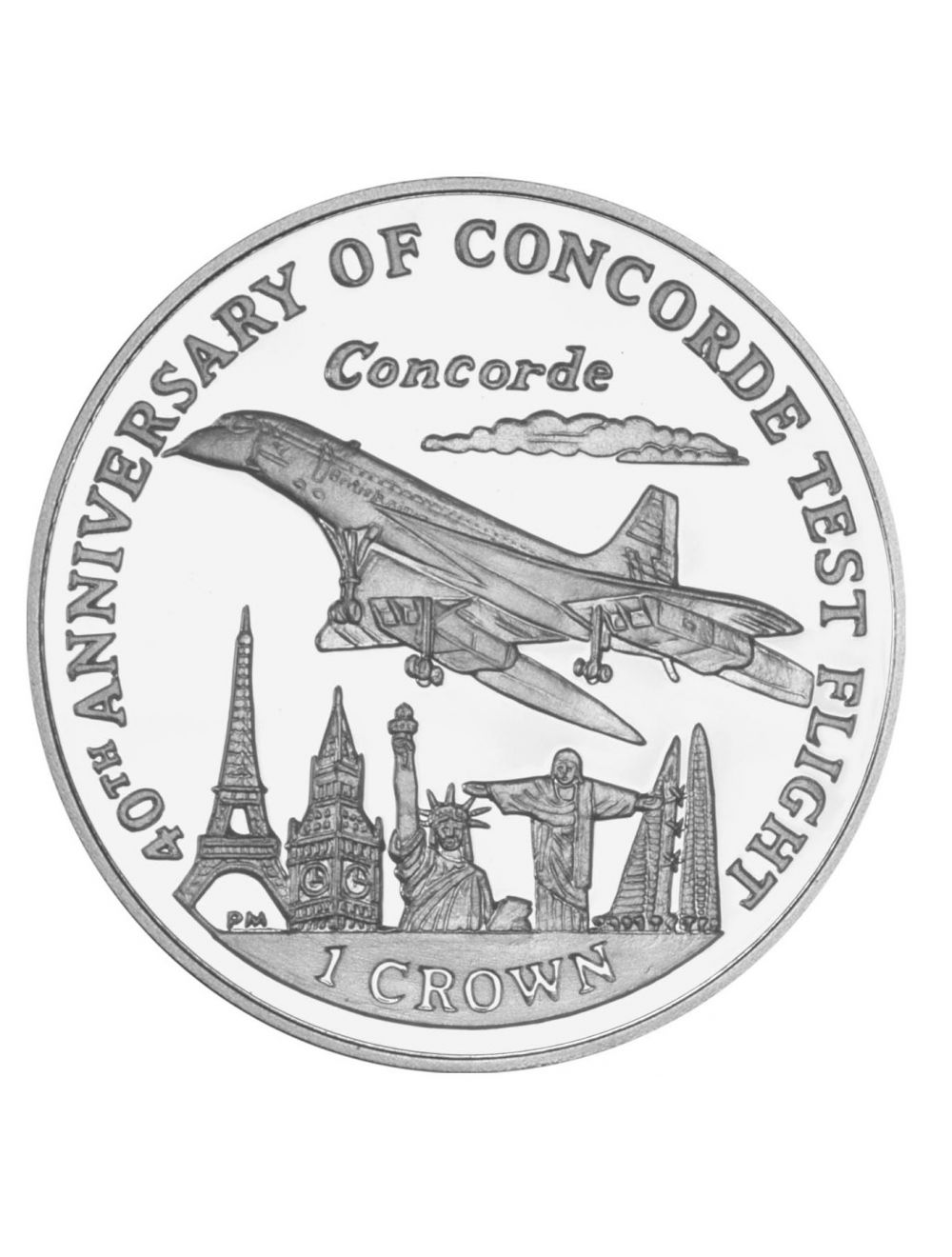 To commemorate the fortieth anniversary of the first ever test flight of the great Concorde this fantastic commemorative coin was introduce by Pobjoy Mint on behalf of the Isle of Man Government.

The Concorde was so fast that it was able to cut flying time to New York from seven hours forty minutes to three hours twenty-five minutes. Concorde's test flight reached 10,000ft (3,000m), but it’s speed never ascended over 300mph (480kph), compared to the speed of 1,300mph (2,080kph) which it eventually reached in commercial flights.

The first supersonic flight was completed on the 1st October 1969 and went on to take its first commercial flights on the 21st January 1976 when British Airways flew from London Heathrow to Bahrain and Air France from Paris to Rio.

The striking design on the coin depicts Concorde in flight with five world famous landmarks underneath Eiffel Tower, Big Ben, Statue of Liberty, Christ Redeemer and Bahrain Trade Centre. The landmarks on this coin represent the 5 main countries that Concorde flew to. The wording ‘40th ANNIVERSARY OF CONCORDE TEST FLIGHT’ is in the surround.

Until the announcement on the 10th April 2003, that British Airway’s Concorde fleet was to retire, the fleet of aircrafts had operated close to 50,000 flights, clocked up more than 140,000 flying hours and travelled some 140 million miles.

The first pilot to fly the ‘the big bird’ as he called it was Andre Turcat. The Anglo-French plane took off from Toulouse and was in the air for just 27 minutes before the pilot made the decision to land. Using a braking parachute and reverse thrust, the aircraft was brought back down to earth less then half an hour after it had taken off. Mr. Turcat and his crew emerged from the plane, signalling a thumbs up with each hand. The Concorde was said to have made a faultless maiden flight. Poor weather conditions meant that two previous test flight attempts had to be abandoned.

The first British test flight successfully completed on the 9th April 1969. Brian Trubshaw was the pilot who flew this test flight in the British-built prototype. The 22 minute flight left from a test runway at Filton near Bristol and landed at RAF Fairford in Gloucestershire.

Approved by Buckingham Palace the obverse of each coin carries a fine effigy of Her Majesty Queen Elizabeth II by Ian Rank-Broadley FRBS FSNAD. This coin is available in Unc. Cupro Nickel and Proof Sterling Silver.  To make this coin more unique these coins will be available in a stunning coloured version.