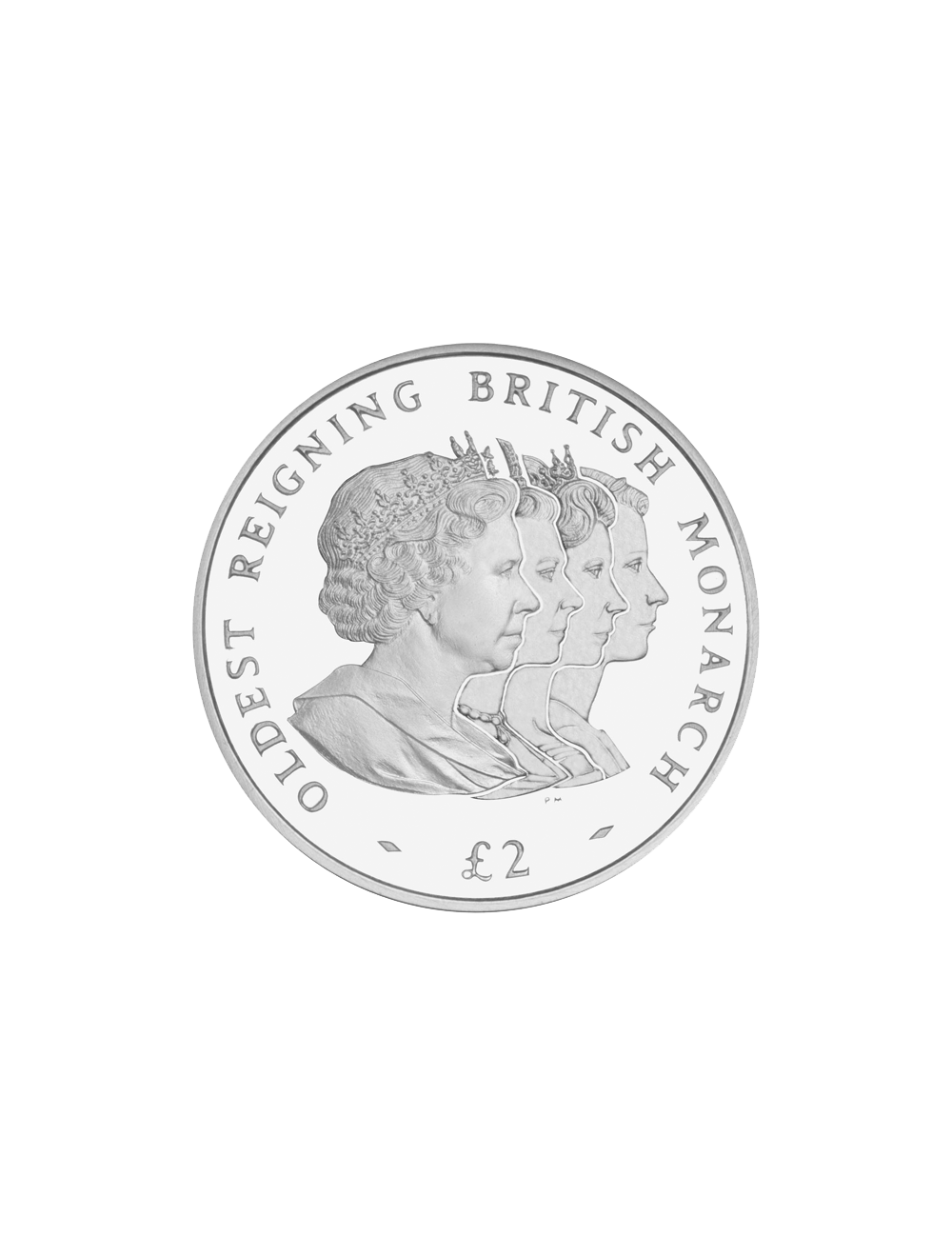 On 21 December 2007 Elizabeth II became the oldest reigning monarch surpassing Queen Victoria who died aged 81 years, seven months, four weeks and one day on 22 January 1901 and she surpassed George III five days earlier.  Queen Elizabeth, who celebrated her 82nd Birthday on April 21 2008, has even outlived her Great-great Grandmother Victoria.  To celebrate this momentous occasion Pobjoy Mint has struck a notable proof sterling silver collector's coin on behalf of the Government of South Georgia and the South Sandwich Islands.

The design of this commemorative coin consists of the four most significant existing effigies of Queen Elizabeth II.  The effigies are layered in date order starting with a full profile of the current Ian Rank-Broadley FRBS FSNAD effigy from 1998 until the present day and the earlier effigies layered behind as follows, the Raphael Maklouf effigy from 1985 until 1997, the Arnold Machin effigy from 1968 until 1984, and finally the Mary Gillick effigy from 1953 until 1967.  The wording ‘Oldest Reigning British Monarch’ appears in the surround of the design.

The design has been approved by Buckingham Palace and the obverse of each coin carries a fine effigy of Her Majesty Queen Elizabeth II by Ian Rank-Broadley FRBS FSNAD and is available in Uncirculated Cupro Nickel and Proof Sterling Silver, the proof version being struck four times to achieve the lustrous Pobjoy Proof finish.

However, Queen Elizabeth II still has several years to go before becoming the monarch with the greatest service.  This title has been held by King George III, who was 81 years and 239 days when he died in 1820.  The Queen will on March 5 2009 overtake Henry III, who reigned for 56 years from 1216-1272. It will be 2012 before she overtakes George III, who served for 59 years from 1760-1820.  With Queen Victoria the monarch who ruled the Empire for almost 64 years, on 9 September 2015 Queen Elizabeth II will take Queen Victoria’s place.

Queen Elizabeth has so far seen 11 Prime Ministers, she has become the first monarch to celebrate her Diamond Wedding Anniversary and she is also the first monarch to have a Prime Minister born during her reign.  The Queen shows little sign of slowing down and continues to carry out about 450 engagements each year and spends up to four nights a week at Buckingham Palace, and three at Windsor Castle, her favourite home.