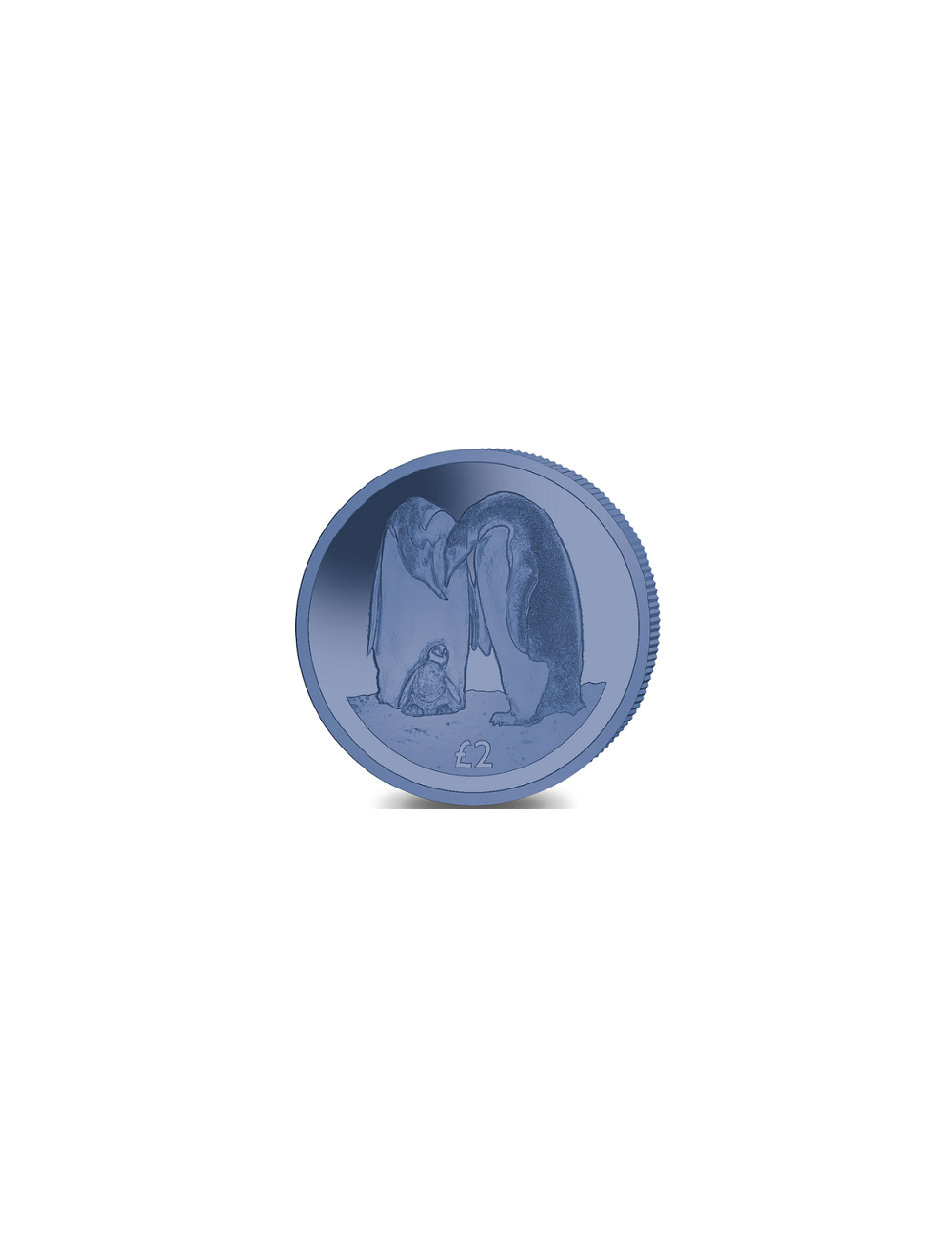 The land around the South Pole, the Antarctic, is the coldest place in the world.  The temperature there has been known to fall below -80˚C/-112˚F. Like all Antarctic penguins, the Emperor, which is the tallest and heaviest of all penguins, has a thick layer of densely packed feathers which trap the air to keep the bird warm, acting as a thermal vest.  To celebrate the fact that this species not only survive but also manages to keep their young safe in these extreme conditions, Pobjoy Mint is delighted to announce the release of a 2019 blue Titanium coin on behalf of the British Antarctic Territory.

The design on the coin itself features a male and female Emperor penguin with their newly born chick sitting on the feet of one of the adults.  The obverse of the coin features the exclusive Pobjoy Mint effigy of Her Majesty Queen Elizabeth II.

Titanium reacts differently with every strike, so each Titanium Emperor Penguin coin is technically different and varies slightly in colour. There is also a lined effect that is present on the coins which is unique to this metal.

The Titanium coin is shipped encapsulated in an acrylic capsule for protection and housed in a stunning red box with a Certificate of Authenticity.

The Antarctic winter begins in March and unlike other animals who sensibly make their way to the warmer parts of the Antarctic, the Emperor penguins march 200 miles in the opposite direction, across the pack ice, in order to breed in the coldest place on Earth.  These nesting sites may be many miles from the sea and up to 25,000 birds will make their way to the sites.  The female lays a single egg which both parents initially protect from the ice by resting it on their feet, carefully manoeuvring the egg backwards and forwards.  The female then returns to the sea to feed, leaving the male in sole charge of their prized possession.  During this time, which can be around 115 days, the male eats nothing, relying on his reserves of blubber to keep him alive.  During this time the males huddle together, taking it in turns to stand in the middle of the huddle to try and survive the icy cold winds of up to 120 mph.  When the female returns, after the egg has hatched, and manages to find her mate amongst the hundreds of fathers by his call.  It is at this point that the fathers can leave to take their turn at sea to feed.  This epic journey featured in the television series ‘Dynasties’ narrated by Sir David Attenborough which was filmed in Antarctica.